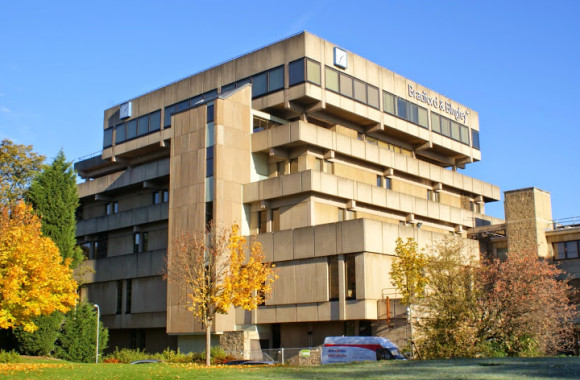 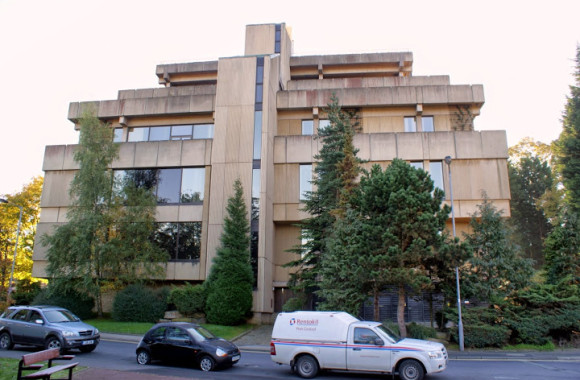 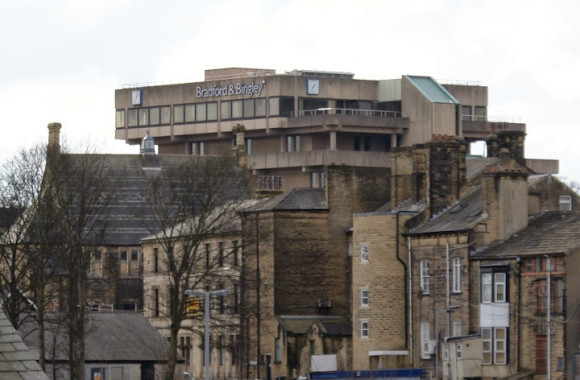 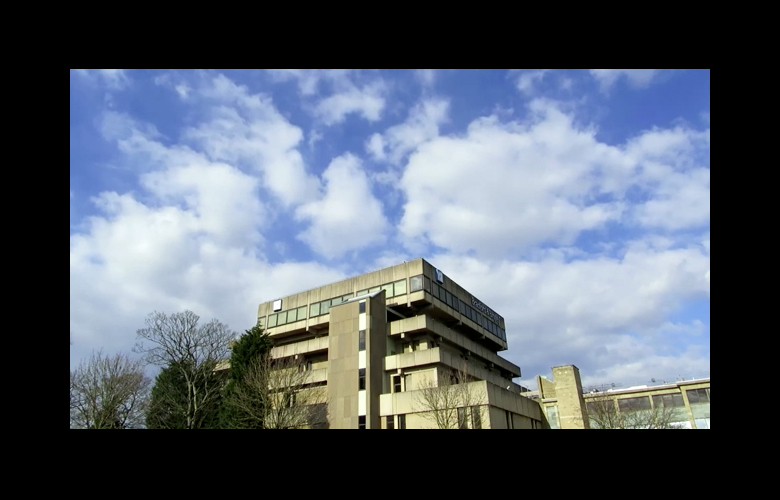 In the early 1970s, in the West Riding of Yorkshire (as it still was – just – then), three buildings went up within 12 miles and three years of each other, all the headquarters of northern building societies, and all in variants of high-brutalism.

They represented (in retrospect, at least) the last-gasp of a sort of Heath-Wilsonian regional resurgence, at a time when “financial services” were not synonymous with the corporate casino-ism of the City of London, but a flourishing of century-old Victorian independent mutuals, and northern self-sufficiency.

The best-known of them is Halifax Building Society HQ [1968-74] by Building Design Partnership, a masterpiece of almost sci-fi brutalism, yet only listed Grade II as recently as 2013.

Less well-known are two buildings by the Bradford-based practice, John Brunton Partnership, both of which now lie disused.  One is the 8-storey ribbed-concrete brutalist “Highpoint”, former head office of the Yorkshire Building Society in Bradford city-centre. The other – the Bradford & Bingley Building Society head office in Bingley – now faces imminent demolition under new owners Sainsbury’s.

The Bradford and Bingley Building Society (BBBS) was constructed between 1972-1974 under Brunton’s Design  Partner Harry Moon AA Dip., RIBA and Project Architect Ron Watson RIBA. Clad in locally quarried sandstone-faced panels, it most obviously references the contemporaneous (although actually finished later) National Theatre of Denys Lasdun in its Ziggurat-like five-stepped stories – in fact, a visual echo of the famous five-rise locks (built 1774) on the Leeds-Liverpool canal, within sight of the building.

Sited on a pinchpoint in the narrow Aire Valley, and visible for miles around, the pyramid-like building was actually an extension to a low-rise, three-storey ‘Festival of Britain’ style original head office, also built by Bruntons.

The design of the ziggurat in terms of its internal spatial planning and external tapered form arose from the landscaped open-plan office theories of the German “bureaulandschaft” ideas of the era – a time when looking to keep up with, even best, continental European practice was by no means seen as outlandish in the North of England, merely ambitious.

The top-floor boardroom enjoys 360 degree views of the Aire Valley. As was banking etiquette in those days, the banking hall for customers was austere, formal, even intimidating temple-like – unlike the retail-led high-street banking of today. The BBBs main banking hall had a large abstract mural by William Mitchell on the wall behind the open-plan concrete tellers counter, which was canted on a 45-degree carpeted upstand.

Until the building was abandoned in 2009, its highly landscaped and planted rock gardens offered a pleasing, sloped green ‘moat’ defending the building from the busy A650 and town centre – or vice-versa.

A private access road at the rear of the building, leading to a small parking area for staff, was named “Thrift Way” – straight-faced probity in 1974. Now, following the society’s 2000 de-mutalisation (under Thatcher-era legislation), subsequent government bailout and nationalisation eight years later at the peak of the financial crisis, and takeover by Santander, providing its own punchline.

The design brief emerged to closely identify the society’s organizational needs and aspirations for quality of environment.  Throughout its occupation the society continued to remain enamoured of the building’s expressed purpose and architectural form. The external materials of locally quarried sandstone-faced panels, design detailing, good maintenance, and lack of internal or external alteration, has permitted the building to retain its original coherent appearance.  The sandstone finish, in terms of colour, was deliberately chosen to match the traditional building materials of its location and setting.  The production drawings and technical specifications for an extremely efficient internal climate system, with heat recovery, air-conditioning, thermal insulation, and modest external glazing were (by coincidence) prepared just prior to the ‘dark days’ of the three-day energy-crisis weeks of 1973. The building was completed in 1974.

At the time of design and construction, the height and scale of the building was complementary to the many woollen textile mills in Bingley, many now demolished, empty or converted to flats – although its two external staircases provide a neat visual echo of the chimney of the Victorian Damart mill factory, still manufacturing thermal underwear, across the River Aire.

The BBBs Head Office remained largely unaltered although its corten Miesian entrance canopy was sadly reclad in cheap blue plastic the 1990s, and graphic designers may mourn the loss of the fat, chunky, 1970s “BBBS” signs that originally adorned the top floor.

Never locally popular, despite providing several hundred white-collar jobs over nearly 40 years, a seemingly urban myth developed that it was one of Prince Charles’ most-hated buildings. There appears little direct evidence of this, the most likely confusion being that it featured in a “Top 10” of Britain’s ugliest buildings in the wake of the Prince’s 1980s television documentary decrying Lasdun’s National Theatre.

The John Brunton Partnership, which dated back to the 1860s in Bradford and went on to have offices in Leeds, London, Bristol, Manchester and Sheffield, folded in 1993.

The building and site were purchased by Sainsbury’s, with the intention of demolition and the construction of a supermarket. In 2013 it announced it would not be building a supermarket, but demolition was delayed through the summer of 2014 by the presence of a roosting bat. Boarding and scaffolding went up around the building at the end of November, with demolition believed to be imminent. Demolition is supported by Bradford Council, Bingley Chamber of Trade and the local MP, Shipley’s Philip Davies (Conservative.)

Matthew Tempest is a journalist, architecture blogger and film-maker. He has made a 7-minute documentary featuring the three buildings mentioned in the text, “Building Societies – a short film about brutalism, the financial crisis and the North of England”, viewable at https://vimeo.com/66771866. The author’s father, John Tempest, was an architect in John Brunton’s Partnership until his retirement.