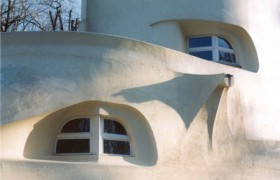 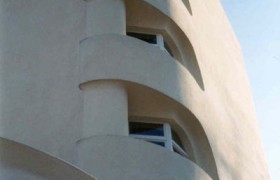 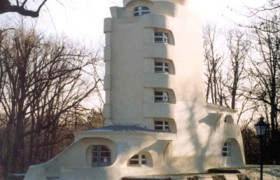 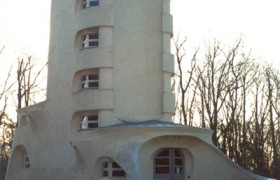 In 1920 the young architect Erich Mendelsohn (1887-1953) was given the opportunity to design an observatory for the purpose of making measurements that might validate Albert Einstein’s theory of relativity. To create a specialised scientific facility such as this would not seem to have given much scope for architectural innovation. ‘You can make the designs for the exterior architecture’, Mendelsohn was told, ‘though this won’t be a particularly rewarding job for you!’ Mendelsohn thought differently.

Between 1920 and 1921 he created a building that was as eccentric and untraditional as the scientific concepts with which it was associated. It brought Mendelsohn fame and established his position in the debates over what contemporary architecture should look like that preoccupied the politicized cultural circles of inter-war Germany.

The Tower unites a domed observatory with an underground laboratory, while housing an unusual optical instrument, an unmovable vertically installed telescope. The requirements for accommodating the delicate optical instruments and other scientific apparatus determined the general elevation and ground plan of the building. Mendelsohn’s task was to design only an appropriate shell for the technical equipment. For the young and unknown architect this was the first opportunity to realise his own architectural ideas. From the beginning he strongly believed in the potential of reinforced concrete to become the building material of a new artistic expression. Having the capacity to overcome the traditional limits of support and load, this building material offered a new, previously unknown freedom in architectural design.

Until then, Mendelsohn had focused on the production of numerous visionary sketches for all kinds of building types, without having ever tested any of his designs against the practicalities of construction. During the erection of the Einstein Tower he quickly came to understand the limits of concrete construction. The deliberately sculptured profiles of the Tower proved extremely difficult to build because of the complexity of the necessary framework. Post-war shortages in the supply of concrete further complicated the situation. Reluctantly, Mendelsohn substituted reinforced concrete with stucco-covered brick for all above ground parts of the building except the entrance, basement and laboratory. He took great care, however, to achieve a uniform surface treatment between the two materials so that the building retained the monolithic appearance of a work conceived entirely in reinforced concrete.

This necessary change of building materials mid-way through construction left no time for Mendelsohn to alter his designs to conform to the conditions of the actual materials. The combination of brick, concrete and render and great variations in the thickness of the walls have been the source of constant problems including dampness and cracking. Only five years after completion, the first substantial repair works had to be undertaken under the direction of Mendelsohn himself. Since then the history of the Tower has been a sequence of repairs and new coatings, the latest of which was completed in 1999. That Mendelsohn never built anything again that remotely resembled the Einstein Tower may be attributed to this disenchanting first-hand experience with on-site poured concrete.

The extravagant appearance makes the building difficult to describe. Its fluid curvilinear, concave and convex forms let it appear sculptured rather than built, resembling in its shape a wind swept submarine with the sprawled arms of a sphinx. Outcroppings on both sides of the building serve as drain spouts. Unusual features include the angled windows placed in stream-lined niches which are moulded into the round corners. Stylistically, the building is seen as an example of the art of Expressionism, and it has been praised both as the epitome of architectural individuality and as the embodiment of modernity. Mendelsohn referred to the plasticity of his design as ‘dynamism’.

It is said that Albert Einstein was conservative in his architectural taste and didn’t like the building much. After having been shown through the building by Mendelsohn he gave a one-word review by whispering into the architect’s ear: .