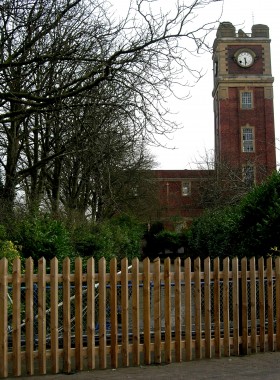 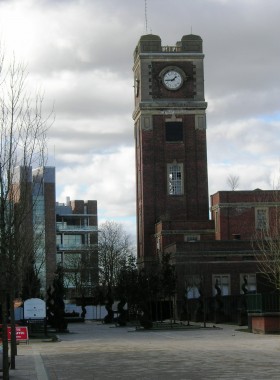 Terry’s of York originated in 1767 in the sugar confectionery business of Bayldon and Berry which by 1824 occupied premises in the fashionable centre of York close to the Mansion House in St Helen’s Square and just round the corner from the Assembly Rooms.  A year earlier, the business had been joined by Berry’s new brother-in-law Joseph Terry who, by 1830, was the sole proprietor.  Over the next century, under Terry family management, the business grew and chocolate manufacture developed to such an extent that by 1924 a site on the edge of the City overlooking the racecourse on Knavesmire was acquired for the construction of a new factory.  Here five buildings, designed by J G Davies and L E Wade, were constructed of red brick with creamy sandstone dressings and concrete and ashphalt roofs.  The five buildings were the Head Office, the Time Office, the factory, a clock tower and boiler house with transformer house attached, and a Liquor Store.  Production in the new buildings began in 1926, and from them famous Terry brands like the All Gold chocolate assortment and Chocolate Oranges were exported around the globe.  During the Second World War, the factory supplied chocolate for lifeboat rations and to prisoners-of-war and refugees.

Until its sale in 1993 Terry’s was very much a family business greatly valued by the local community.  The factory (above) and especially the clock tower are within sight of the Terry family home, Goddards, now the Yorkshire headquarters of The National Trust.  Not only have generations of the Terry family served as directors and board members, but so have generations of ordinary York families worked in the different manufacturing departments.  People have spoken of the conspicuous clock as being their ‘kitchen clock’, and condemned their enemies as having ‘more faces than the Terry’s clock’.  (It has four!)  Its visibility has been put to good use to advertise the firm by the substitution of the letters ‘TERRY YORK’ in place of the clock face numerals.  During the Second World War while some parts of the factory were used for manufacturing aeroplane propellers, the clock tower was used for fire watching.

In 1993 Terry’s was acquired by the Kraft Corporation of America, and in 2004 Kraft announced that the York factory would close the following year.  Fearful that a group of disused factory buildings with great significance in the industrial history of York and in the social history of two or three generations of the people of York would be razed to the ground for redevelopment of the site, all five original buildings were referred to English Heritage for consideration for listing.  In March 2005 all were listed Grade II.  At the time the clock tower was designated, the list description indicates that the boiler/ transformer house was still operational with machinery filling the ground floor.  The upper stages of the tower were inaccessible but it is believed the clock machinery was intact and the roof of the tower supported a cast iron water tank.  The clock has particular importance, having been identified by the Electrical Horology Group of The Antiquarian Horological Society as an Electric Turret Clock, operated by an electrically driven mechanism known as the Gents’ “Waiting Train” system.  When the factory closed, Terry’s clock was one of possibly only two of its kind still in operation in the UK.  It was said to be of considerable technical interest as so many other examples of the type had been lost or had their operation replaced by more modern systems.

Alternative uses for all the listed buildings except the clock tower and liquor store had been approved by the end of 2015.  A proposal to convert the clock tower to residential use had been consulted on in the community but not proceeded with.  Concerned about the damage that residential conversion would do to the character and appearance of the clock tower, a community forum was arranged at which the clock tower was used as a case-study for a research project on community engagement with the heritage conducted by Leeds University.  Alternative suggestions for the reuse of the tower were invited from local people who said it should have community use.  Ideas put forward included the reintroduction of chocolate-making and a chocolate restaurant;  an art centre and exhibition space telling the story of Terry’s and explaining the historical topography of the area;  scuba diving in the water tank (!);  and reconnection with Goddards as part of a Terry’s tourist trail.

In 2015 the clock tower and adjacent Liquor Store were put up for sale on the Rightmove website, price on application.  The sales pitch suggested the buildings would offer an opportunity for leisure and heritage uses.  At the beginning of 2016 both were withdrawn from sale and the indication now is that conversion of the tower to residential use is being reconsidered seemingly because its “unique shape and size (make it) a difficult building to develop“.

The factory is being turned into flats;  the Head Office will become a nursing home;  the Time Office building is already being re-used as offices.  To turn the clock tower into flats would destroy its character and fail to acknowledge and respect the significance it holds for generations of York families.