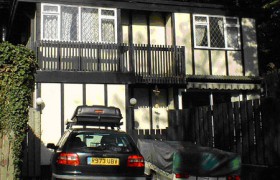 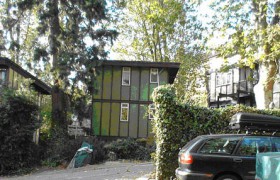 Text and pictures by Hawksmoor Hughes

Those taking a walk past no. 7 Walter’s Way in Lewisham, South-East London may well be puzzled as to the origin and style of this small three-bedroomed detached house set in a leafy suburban cul-de-sac. The architecture of the house and of its neighbours recalls Japanese and American timber-framed buildings, though at the time of building local residents likened them to prefabs. In fact, the houses represent an attempt to solve the problems of the housing crisis of the late 1970s. Local council tenants were given the opportunity of constructing and ultimately owning their own homes, which were built at a low cost on terrain unsuitable for conventional building. The thirteen houses on Walter’s Way, built from 1977 onwards, form part of the earliest low-cost housing self-build project in the country.

The project was the brain-child of enlightened Lewisham Labour councillors, led by the councillor and architectural writer Nicholas Taylor, author of the influential (1976), and the architect Walter Segal (1907-1985), after whom the street is named. For Segal, up to then the designer of conventional modernist buildings such as the Ovington Square flats in Knightsbridge this was to be a change in direction. The method of building he devised (now called the Segal Method) was so designed that it would pose no problems to unskilled workers. It simply entailed screwing together a wooden frame and infilling with building board and insulation. The self-builders took evening classes to learn the necessary plumbing and electrical wiring skills.

The future residents were also given the opportunity to have a say in the design of the layout of the interior, and, while some accepted Segal’s modernist aesthetic others, such as the builders of no. 7, managed to override this and incorporate their own more traditional tastes. They were keen to live in a cottage. While the flat roof and cube shape were inescapable, they decided to install mock-Tudor lattice windows, paint the exterior black and white and whitewash the interior thus obscuring the timber batons that are so synonymous with the Segal design.Rather than installing Segal’s plain interior doors they opted for ones with Georgian-style panels. Thus this building represents a compromise between the architect’s modernist aesthetic and the occupiers’ aspirations. In the mid-1980s the couple left the street one year after the building was finished to live in a mock-Tudor cottage.

The new residents of no. 7 have different ideas. They have removed the paint from the interior batons and expressed a desire to replace the windows with something they feel is more in keeping. They feel that through doing this they are restoring the house to an authentic original, even though this original never existed.