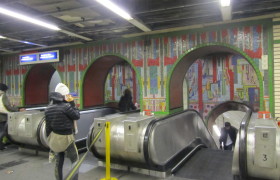 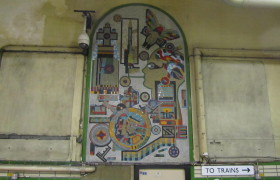 The redevelopment of Tottenham Court Road underground station as part of the new Crossrail link is set to see the loss of two important Sir Eduardo Paolozzi murals that make up part of the 1980s artistic scheme for the station.

The demolition of these two elements – a double set of tiled arches over the escalators in the main concourse and a large decorative panel at the entrance to the south side of Oxford Street, would be a major loss to London. We want to see every effort made to relocate or retain them in the new station.

These two pieces are integral to Paolozzi’s comprehensive scheme for the station. They form an important part of a very special and unique work of public art that is seen by thousands of people every day.

Henrietta Billings, senior conservation adviser at the Twentieth Century Society, said: “We are very concerned about two key areas of the comprehensive Paolozzi mural scheme at Tottenham Court Road underground station that are set to be demolished imminently under the current Hawkins Brown plans. We’ve raised our concerns with TfL and we are meeting with Roger Hawkins next week.

We appreciate that TfL has worked hard to retain as much of the murals at platform level as possible and that integrating Crossrail is immensely complex. But both of these pieces are of very high quality and we believe they could be successfully retained within the new station – or relocated. To destroy them would be a tragic loss and London deserves better.”

Sir Eduardo Paolozzi (1924-2005) was one of Britain’s most prolific artists and sculptors of the twentieth century. Knighted in 1989, he was a Royal Academician and Her Majesty’s Sculptor-in-Ordinary for Scotland. Over 350 works including sculptures and art works are in the Tate gallery collection, and a total of 27 works are housed in the Scottish National Gallery of Scotland. His work is also owned by the Government Art Collection, the Guggenheim Collection in Venice, Italy, and the Museum of Modern Art Collection, New York.

The mosaics at Tottenham Court Road station were commissioned in 1980 by London Transport and completed in 1984. Following on from Tottenham Court Road, Paolozzi was commissioned by Redditch Development Corporation to make mosaics for the Kingfisher Shopping Centre in Redditch town centre. These 12 giant panels are cited as one of the most significant works of modern public art in the West Midlands. See here for more information regarding the Redditch murals and our on-going murals campaign.