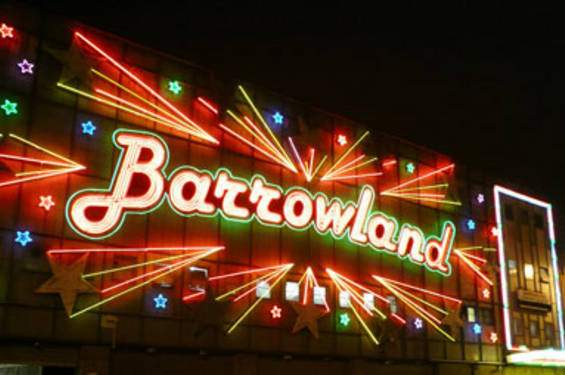 The Barrowlands, or The Barrowland Ballroom was originally built as a dance hall. It was designed with excellent acoustics for the unamplified orchestras which formerly graced its stage, and a sprung dance floor. It has survived to become renowned as a world famous concert venue.

In 2005, the Barrowlands was voted ‘the best venue in the UK’ by more than 60 bands polled by Radio One.

The original building opened in 1934 next to the “Barras” street market, after which the area and the ballroom are named. This building was largely destroyed by fire in 1958. The rebuilt ballroom opened on Christmas Eve 1960, as proclaimed by the distinctive animated neon sign, which remains a Glasgow icon.

The original outdoor hand-barrows market was covered over in 1926 by the entrepreneur Margaret McIver as she observed: “The hawkers, having been out in all weather gathering their wares during the week, got their clothes washed and dried at the steamie and then hung them up at the weekend only to have it soaked by rain”.

Tradition has it that Margaret McIver, with her husband, James, having built up the Barras market from one barrow selling fish and fruit, gave a dance for all her stallholders every Christmas. After finding the local St Mungo’s Halls already booked one year she decided to build her own.

During the 1930s the ballroom was let to Billy Blue and the Bluebirds, but the queues for the regular dances brought home to Maggie McIver that she had a money-making opportunity she was failing to exploit. She poached the Bluebirds’ drummer, Billy McGregor, to form a new resident band. It became Billy McGregor and the Gaybirds and packed in the foxtrotters and tango-turners throughout the thirties. American servicemen racily introduced jiving and jitterbugging during the Second World War.

At that time the neon sign on the front of the ballroom was in the shape of a man pushing a barrow. It was a landmark which was to turn Barrowlands into a footnote in history. Nazi German radio described it in such detail in their propaganda broadcasts claiming to bomb the Barras that it was removed.

There are current concerns over the long-term future of the venue: if the building were ever to be sold, it would struggle to survive in a hungry property market. Although many historic buildings in Glasgow’s East End have reinvented themselves through conversion to housing, like the former Templeton Carpet Factory on Glasgow Green, it is hard to see how such a striking facade as the Barrowlands’ sign could be retained and adapted to mask an alternative use behind.

Discussions with Historic Scotland to find ways of safeguarding the long-term future of the Barrowlands and the iconic sign have drawn a blank.

Historic Scotland has suggested that it cannot list the sign to protect it, as it does not meet their “rigorous standards as a building of special architectural or historic interest”. They feel that the sign itself has cultural significance but it is not possible to list ‘elements’ of a building, as the listing would need to cover everything at the statutory address. Unfortunately they feel that the building itself does not have sufficient architectural or historic merit.

Venues such as ‘The Apollo’ were Glasgow landmarks in their time, yet only survive as memories to the generations lucky enough to experience them. It would be awful to think that such a world-renowned landmark could be only a memory, lost to developer sprawl lacking in cultural context.

As a response to this NORD Architecture have started a campaign which aims to safeguard the future of the Barrowlands and its iconic sign.

Blueprint magazine recently covered the campaign as a feature, with NORD inviting Glasgow design companies to produce artwork for a limited edition postcard range. These postcards will promote the campaign to save the cultural icon of the sign, and so save the Barrowlands as a live music venue.

Letters of support have flooded into the campaign, as many people rightly see the neon sign as landmark for the Scottish music scene and integral part of Glasgow’s cultural heritage which is recognised worldwide.

Glasgow-based designer Emlyn Firth of Stand has created a Myspace page for fans of the Barrowlands sign to express their support. www.myspace.com/ilovethebarrowlands.