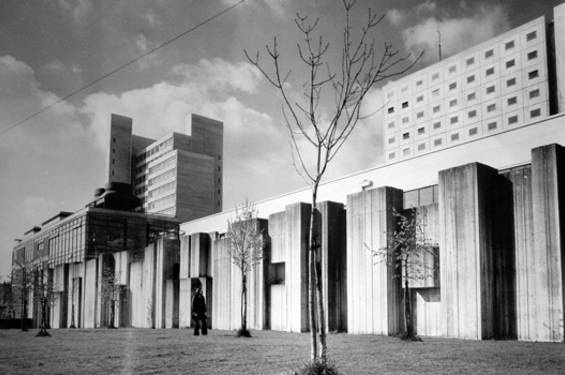 The origins of UMIST can be traced back to the foundation of the Manchester Mechanics Institute in 1824 in the Bridgewater public house. In 1902 the Institute relocated to a new home on Sackville Street, designed for them by Spalding and Cross, latterly extended to designs by Bradshaw, Gass + Hope that took thirty years to complete (1927-1957). The Institute became the School of Technology (1902) and later the Municipal College of Technology (1918). The college gained its own charter in 1956, meaning more focus on degree level academic courses. It was not until 1966 that the name University of Manchester Institute of Science and Technology was adopted.

The new UMIST campus expanded to the south of the Manchester to Liverpool railway, extending into Chorlton upon Medlock, and included a number of new buildings and conversions by various architects including Harry S. Fairhurst + Sons and Thomas Worthington + Sons, both long established Manchester firms. It was the latter who designed the uncompromising square grid facades of Staff House (1960); Hubert Worthington, son of Thomas, was responsible for the design of the original Educational Centre in the 1945 plan.

The masterplan for the campus was developed in 1960 by W.A. Gibbon of Cruickshank and Seward and it is Gibbon’s legacy that presides over the stepped site as it descends toward the Medlock Valley. Chandos Hall, the Renold Building, the Barnes-Wallis building and the Ferranti Building are all by Gibbon and all feature his trademark white concrete. He is known to have visited Brazil prior to this commission and was influenced by the work of Niemeyer, though the only real flourishing gesture is the curved stair that elegantly sweeps into the courtyard between the Renold and Barnes-Wallis buildings. The Renold Building was unsuccessfully proposed for listing in November 2005. A further two of the group are currently under threat from the sale and redevelopment of the site as the University of Manchester seeks to consolidate its estate. Also under threat is the innovative Chemical Engineering Pilot Plant by H.S. Fairhurst; originally the service runs were all defined in their own specific colours, predating Pompidou by five years. This building is flanked by a sculptural wall, similarly at risk, about which little has been written or researched.

The wall was built in 1968 to designs prepared by artist Anthony Hollaway, commissioned by the University of Manchester Institute of Science + Technology (UMIST). The artist was working in collaboration with architect Harry M. Fairhurst; they also worked together to design the concrete relief panels of the Chemistry building on the same campus and, much later, the windows at Manchester Cathedral.

Hollaway was amongst the pioneer artists to work with the London County Council (LCC) Housing and Architects’ Departments and to lead research at the Cement and Concrete Association (CCA) at Wexham Springs. Other ‘consultants’ to the LCC included Victor Pasmore and Kenneth and Diane Rowntree. William George Mitchell also had a strong association with the CCA. During this period Hollaway worked with Basil Spence, Sylvia Crowe, Eric Lyons and Ove Arup, amongst others.

Many of the structures similar to this, by artists, were retaining walls. This was designed as a sound buffer. As such, this particular wall has more ‘object’ status as it stands upon its field rather than embedded within. The work was designed to ‘enhance weathering and texture’ by the use of ‘rough sawn formwork’.

The work of these artists toured the UK in 1963, promoted not as art, but as solutions to design problems. The LCC had originally made the role of ‘design consultant’ to counteract negative perception of their mass housing schemes. The appointment of artists coincided with serious investigation of industrialised building methods and the two co-existed until the late 1960s. The LCC had their own materials testing section that would conduct accelerated weathering and stress tests at the bequest of the designer. Other towns, including Washington, Glasgow, Cumbernauld, Stevenage and Milton Keynes, also appointed artists as consultants.

Hollaway himself speaks of this, “the main endeavour was the decorative exploration in new ways of materials in common use and the inventive use of new materials emerging for purposes usually other than their expected application to the building industry”.

This innovation was formalised by application for patents. Hollaway held patents for ‘extruded decorative concrete’, ‘polystyrene shuttering’, ‘urea formaldehyde shuttering’ and ‘resin mix extrusions’ in various specific forms. He acknowledges the influence of Corbusier when developing his work with concrete. The role of the CCA and LCC testing departments in the development of his knowledge is clear.

Hollaway also discusses the ‘value’ ascribed to the Local Authority-led work, when compared to the ‘Patronage of the Arts’ arrangement. The latter was a more conventional commission based system that effectively cost up to 12 times the amount of the municipal programme. As such, works procured by the arrangement were more often defined as ‘art’, whereas work by Hollaway and his contemporaries was not.

As much of this type of work was actually contained within the material fabric of buildings, its value has never been truly appreciated and a significant amount, particularly works to foyers and other internal areas, has been lost without comment. The catalogue of works by the LCC is unknown and all archive material lost after the dissolution of the GLC.

The work is certainly of national importance insofar as it reflects a particular condition and set of circumstances that uniquely afforded a large number of artists significant funding into material research and development. That this work was initially led by Local Authorities and then followed by the commercial sector is also important. The later work under the ‘Arts for Architecture’ programme through the 1980s may be considered to be of lesser quality than works of this period. This pioneering, experimental and co-operative spirit is not necessarily one that has subsequently existed.

Hollaway died in 2000 and is better known for his work with stained glass; his work in the construction sector is not well recorded. Were this particular work autonomous and clearly within its own setting it would undoubtedly be of more repute. As it stands, the functional character serves, unfortunately, to neutralise its impact and thus its wider ‘prominence’.

Manchester City Council and the University of Manchester currently propose the site as a development area. As such, the wall is under threat of demolition and does not register as a concern in the preliminary development briefing documents.

Richard Brook is Senior Lecturer at Manchester School of Architecture. His particular research interest is the architecture of modernity, the machine age and functionalism. 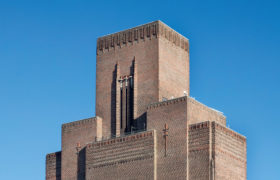