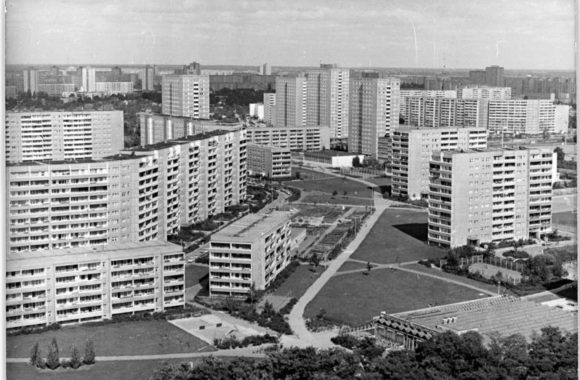 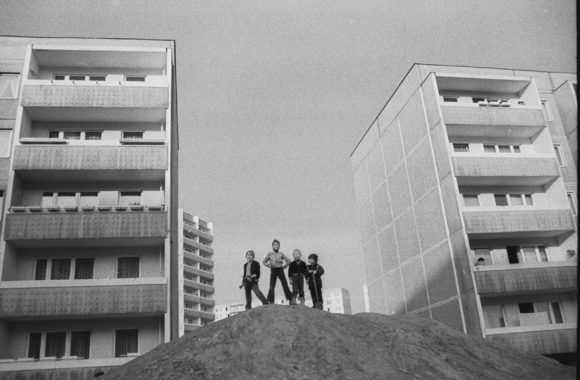 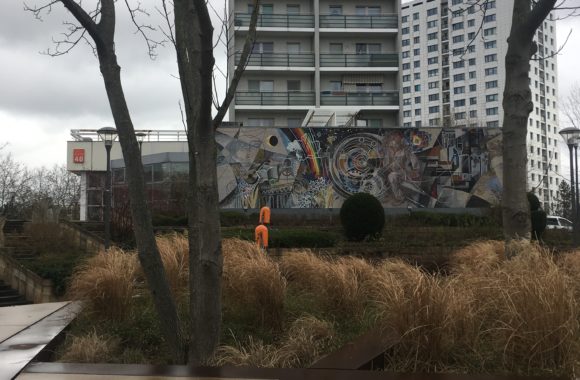 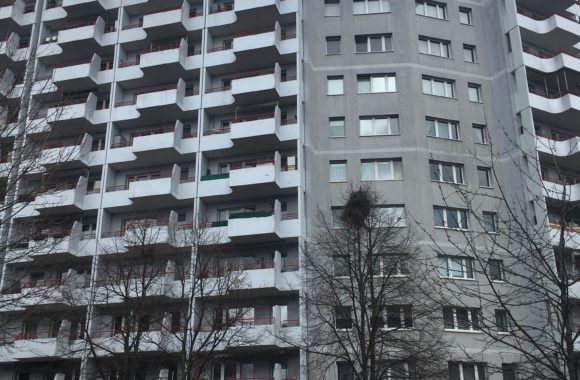 In post-war Germany, the desire to rebuild “murdered cities” led urban planners, architects, and political figures in West and East Germany to propagate new community identities through physical rebuilding. Modernism became the architectural vehicle through which new identity was constructed, and this was manifested in strikingly similar ways on either side of the Berlin Wall. After reunification in 1990, lingering negative associations with socialism in former East Germany have proven difficult to overcome. The Marzahn housing development in East Berlin, believed by some to be “the only real GDR district” and a shining example of “Real Existing Socialism,” is now viewed as the “Bronx of Berlin” that suffers from a loss of communal identity.

Socialist Marzahn was conceived as a tabula rasa, drawing strong associations to CIAM and Le Corbusier.  The notion of a “clean slate” to rebuild identity was a powerful vision within the German Democratic Republic (GDR) and one that took its most forceful expression in the Marzahn development. Before prefabricated mass housing, living conditions for working-class Berliners were very poor, with 75% of the population living in overcrowded, nineteenth-century slums. After the Second World War, GDR officials attempted to alleviate these conditions through neoclassical developments like Stalinallee and Stalinstadt. However, these were quickly criticized as unsustainable, and the move towards prefabrication came swiftly as planners and architects sought to address the pressing housing crisis.

Following reforms in the 1960s and 1970s, the GDR promised modern dwellings for every East German by 1990. This necessitated nearly three million new homes, with places for 450,000 residents ultimately located in the areas in and around Marzahn. Roland Korn (b. 1930) was selected as chief architect following a competition in 1973. His initial architectural team included Ewald Henn, Rolf Laasch, and Horst Siegel, with many other architects, engineers, and planning officials contributing throughout the course of development. Korn envisioned a development that would holistically meet its future residents’ needs by integrating infrastructure such as public transportation, shopping centres, schools, playgrounds, nurseries, and medical clinics within the newly built housing complexes. Planners also ensured natural light, green space, and pedestrian paths were central in the scheme.

Marzahn’s housing estates were designed using the GDR’s WBS 70 Plattenbau, or concrete panel, system. Plattenbau were prefabricated methods of building in which large concrete slabs were modularly arranged to create inexpensive mass housing. Drawing from previous panel developments like Hoyerswerda (1955-1962), which had utilised an earlier generation panel system, the development at Marzahn was considered a more advanced application. The WBS 70 system used a larger panel size than its predecessors which allowed for more spacious and better-lit living spaces. Panels were precast in newly designed factories utilising a then state-of-the-art moisture-control system that allowed for better quality control. Once dry, they were transported to Marzahn and positioned on site via an assembly line in which cranes were mounted on fixed tracks to guide panels into place. The installation of utilities such as electricity and plumbing would follow, after which the dwellings would be ready for their new occupants.

Construction continued for over thirteen years, from 1977 to the fall of the Berlin Wall in 1990. It incited a powerful, literal vision of rebuilding society. Public art works were introduced, and the five-, eleven-, and twenty-two-storey housing blocks were differentiated by colour signalling. Though decorative elements were seen as underwhelming in the sea of concrete, some stand-out works include murals by well-known GDR artist Walter Womacka (1925-2010), for example his Arbeit für das Glück des Menschen (Labour for the Happiness of People) (1989) located along the main pedestrian street.

For those moving into Marzahn, the new development was a profound shift from their previous inner-city tenement life. The comfortable new dwellings were occupied primarily by families with children, with many adults working in Party-sponsored positions. Residents created their new communal identity through building cooperatives and social organizations, all facilitated by the site’s design. Despite shortcomings in prefabricated construction and landscaping – such as water ingress issues from misaligned panels or fields of mud in place of lush, green grass – residents were proud to claim their place as Marzahners.

Following reunification in 1990, this idyllic socialist life was abruptly reversed. As central Berlin underwent massive regeneration efforts, younger residents left Marzahn for the former nineteenth-century slums that had now been thoroughly gentrified, resulting in significant population decline at Marzahn. Consequently, housing units were sold to private investors, resulting in drastic increases in rental prices. For those still government-owned, some buildings underwent Rückbau (“unbuilding”), where a few stories would be removed from towers as a way to reduce vacant buildings. Public services such as schools were closed, and unemployment rates increased. The majority of housing units remained, however, and, following a comprehensive regeneration programme in the early 2000s, have since been well-maintained.

External media portrayals of Marzahn remain stigmatized due to lingering ideological links to socialism, with the area often portrayed as government dependent, extreme- right in leaning, and unsafe. However, long-time residents see media depictions as inaccurate or prejudicial and instead feel tremendous loss about their former communal way of life. As housing stocks become more limited and rent increases in central Berlin, Berliners look to outer fringes for affordable housing. Marzahn is still, however, viewed as a last recourse with the persisting image, as historian Eli Rubin describes, of a “very bittersweet, stranded utopia.”

Written by Rebekah M. Coffman, an art and architectural historian based in Minneapolis, MN whose research centres on intersections of community and identity through visual culture and the built environment. The Building of the Month feature is edited by Joshua Mardell.

Annemarie Sammartino (2018) “The New Socialist Man in the Plattenbau: the East German Housing Program and the Development of the Socialist Way of Life.” Journal of Urban History, vol. 44, pp. 78-94.