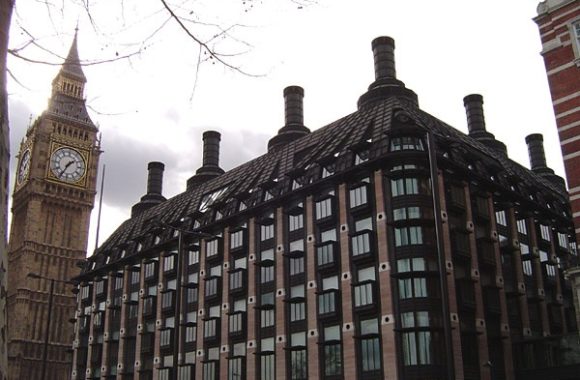 With Richmond House under threat and the Palace of Westminster Restoration and Renewal project underway, eyes have once again turned to Portcullis House and Westminster Underground Station. Although the modifications are as yet unspecified, following the re-location of the House of Commons it is unlikely that Portcullis House in particular will remain unscathed.

The C20 Society is campaigning to protect Portcullis House as one of the most ingenious and highly crafted design solutions of the late 20th century. As well as being located on perhaps the most prominent and sensitive site in the UK, at the time of its completion it was considered by Building Design to be “a striking and memorable addition to the riverside skyline, complementing and contrasting with the universally recognised image of London’s Houses of Parliament and Big Ben”, with “neo-gothic roofspace… advanced engineering and technology which may earn a place in the history books.”

Both elements were designed by Michael Hopkins and Partners: Westminster Station as part of the Jubilee Line Extension project and Portcullis House as offices and meeting rooms for Members of Parliament, uses they retain today. The seven-storey building was designed to accommodate 600-700 people across MPs’ offices, select committee rooms and conference room.

A bold, contextual building, it took cues from both the Norman Shaw building adjacent to it and the Palace of Westminster itself, with turret-like chimneys and a striking bronze façade, topped with a distinctive black bronze roof. Within, the offices are arranged around a large covered courtyard, enclosing a café, library, post office, shops and used as a venue for informal gatherings. The materials are superlative – MPs’ office and meeting rooms are all lined in English Oak – and Portcullis House is also notable for being environmentally innovative. The concrete of its structure was designed to act as a heat sink, evening out temperature peaks and the water is carefully managed with an air conditioning system being sourced from bore holes (and does not require refrigeration plant) and then re-used as grey water for the sanitary systems. Architecture Today summed up these innovations, commenting: “Overall the project is a striking instance of the way that traditional materials can be used in innovative ways with inventive design and the use of modern technology. Some six hundred years after the daring hammer-beam roof of Westminster Hall the Palace of Westminster will once again have a timber structure that is at the forefront of technology and art.”

Portcullis House’ construction was not without controversy, mainly due to the cost scrutiny associated with public buildings, which was exacerbated by the need to minimise disruption to London’s transport network. But today, it is generally considered the best and most popular governmental location by MPs and the C20 Society considers that both it and the station be added to the National List at Grade II* for their architectural and technological innovation and clear exceptional heritage value.