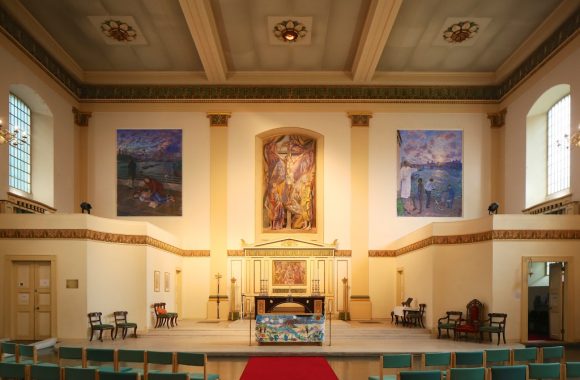 The current proposals to alter St John’s church Waterloo (Francis Bedford, 1829, Grade II*) are extremely damaging to its post-war interior. After a direct hit by an incendiary device in 1940, the church required substantial reconstruction, and little of the interior was salvageable. The job of restoration fell to Thomas Ford, who was constrained by the economic concerns and materials shortages that often beset reconstruction projects in the immediate post-war period.

Unexpected assistance came when it was decided to link the project with the 1951 Festival of Britain. But this had an immense impact on the design: not only did the building have to be finished in time for the festival, it also had to reflect the ethos of the time and provide space for lectures and concerts near the main site. Ford’s scheme reflected his interest in Greek decorative motifs, unifying the space whilst focusing the eye on the sanctuary area. This was Ford’s first collaboration with the celebrated muralist Hans Feibusch (see Robert Drake’s article in C20 issue 2014/2).

The church is still a venue for concerts and events today, and indeed has its own resident orchestra, and it is this that has led it to decide to upgrade its internal space: improving the acoustic and storage facilities for instruments and re-configuring the internal space. Unfortunately, the proposed scheme causes significant damage and loss to the Ford internal ensemble, involving the demolition of the chapel and vestries as well as the loss of the distinctive twin ambos. We think that the necessary improvements could be achieved with a less invasive and damaging scheme. Apart from the Festival Hall, the church is the last remaining tangible memory of the Festival that is still on its original site.

As a listed Church of England church, St John’s falls under the remit of ‘ecclesiastical exemption’, the system that allows certain denominations to determine their own applications instead of applying to the local authority for listed building consent. In such cases, amenity societies are usually consulted by the parish at what would be considered a pre-application stage. It is common for the Diocesan Advisory Committee to recommend that the views of the societies be sought before submitting a faculty application (application for permission) to the Diocese for approval. Anyone who has lodged an objection is then invited by the Chancellor of the Diocese to become ‘party opponent’ in the case at consistory court (the ecclesiastical court of the Diocese). This involves a considerable amount of input to the Chancellor in the form of both written and oral representations.

We are preparing for the court hearing which is due in December, and have been fortunate in securing the pro bono services of a barrister and an acoustic engineer. Historic England and the London Borough of Lambeth, although not parties to the case, have issued strong statements agreeing with our objections. We believe we have a strong case, but regardless of the outcome, our ultimate purpose is to uphold the principles that C20 fittings in a Grade II* listed building are of major significance and that it is the church’s responsibility to safeguard them. In the recent consultation on the future of ecclesiastical exemption in Northern Ireland, we strongly – but unsuccessfully – recommended abolition, as we believe that the system is not working. In our experience the majority of cases are ruled in favour of the parish despite the objections of amenity societies, and we do not have the resources to become party opponent except in the most critically important cases. The result of the consistory court hearing for St John’s Waterloo will demonstrate whether our concerns are justified.