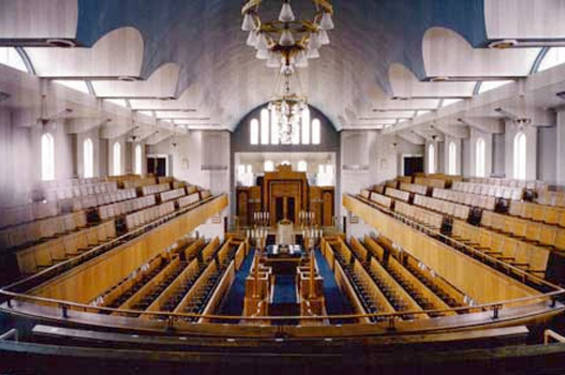 The Greenbank Drive Synagogue was built in 1936/7 and is the work of the notable Liverpool architect Sir Ernest Alfred Shennan. Most of his other work is also in Merseyside and comprises a diversity of building types. His inter-war designs included Westminster Banks; five cinemas including the listed Forum Cinema on Lime Street, Liverpool; restaurant interiors (The French Café and Arabic Café, both 1933, Liverpool); dance halls (The Grafton Rooms, Liverpool, 1934); hotels and office blocks. Greenbank Drive is Shennan’s only synagogue and is very different to the rest of his oeuvre up to that time which, apart from the banks, was distinctive art deco.

To put this building in context: in the first half of the 20th century, Anglo Jewry did not enthusiastically adopt international modern architecture for its new synagogues and community buildings. (This is in dramatic contrast to Jewish Community buildings in Palestine and the emergent State of Israel during the 30’s and 40’s, which produced the most extensive legacy of modern movement buildings anywhere.) Owen William’s Dollis Hill Synagogue (1936, now mutilated) was the only genuinely modern movement synagogue. Though there are some impressive deco influenced synagogues dating from the late 1920s, they are all to some degree exercises in historicism, often combined with exoticism. (See for example the splendid Byzantine art deco of the former Leeds New Synagogue, now the Northern School of Contemporary Dance, 1938 by J Stanley Wright and Clay.)

Greenbank Drive is very different as in its design Shennan produced a synthesis of his previous art deco style and other modern architectural tendencies. It directly reflects Swedish architectural influences, both in the exterior of the building, which is clearly inspired by the late fruition of the Swedish national romantic style, and in its interior, which draws on contemporary Swedish functionalism. In consequence, Greenbank stands alone as a synagogue which is really significant in terms of the progressive architecture of its time. Although clearly not ‘international modern’, it was a genuine attempt at a new architecture appropriate for a modern synagogue, and succeeds in these terms. We are for once looking forward, not back to an exotic past.

The Synagogue has a re-inforced concrete and steel frame structure, with the external walls faced in ‘golden brown’ hand cut bricks. There is a grand approach to the west front entrance up two flights of shallow steps, with curved concrete balustrades. The west front has a three bay projecting entrance, with three semi-circular headed double curved brick arches supported on circular brick piers. (This composition draws directly on the influence of Ivar Tengbom’s Hogalids Church in Stockholm.)

The daylight flooded interior is more original and inventive, reflecting Swedish functionalism without any direct homage. A cantilevered gallery is wrapped around three sides (open at the east end) in a graceful elliptical curve. The spectacular and innovatory ceiling configuration has a barrel curve between the north and south sides of the building springing from above continuous canopies of intersecting segmented concrete arches which run west-east above the upper range of windows on each side of the building. There is a clerestory of semi circular lunettes, each set within and framed by a segmented curve of the concrete canopy above. This concrete canopy is understood to be the very first use of this architectural form in Great Britain. This may well have been an influence on similar concrete canopy designs during the 1960s. See in particular the canopies of very similar design at St. Peter’s Seminary, Cardross designed by Isi Metzstein of Gillespie Kidd and Coia (1962/68 – Scottish Grade A).

There is a central Bimah (raised enclosure for the celebrant) in light oak with gilt metal railings. The Ark (cabinet containing the Torah scrolls) at the east end is in oak inlaid macassar ebony with gilt art metal work, approached up five travertine marble steps. Both the Bimah and the Ark are finest examples of the style of art deco craftsman made joinery and metal work which became characteristic of the great 1930s ocean liners.

Greenbank Drive Synagogue is architecturally by far the most important and innovatory 20th century synagogue in England and is the finest surviving synagogue in Europe dating from the inter-war period. It also has important socio-historic significance as representing a last late optimistic cultural expression of European Jewry before the holocaust.

Despite the new II* listing, this building remains at risk as the synagogue closed in January and conversion of the building into housing association flats has been proposed. This scheme would be a mutilation, destroying the uniquely important interior. The Twentieth Century Society is now actively involved in trying to secure an appropriate and sustainable future.