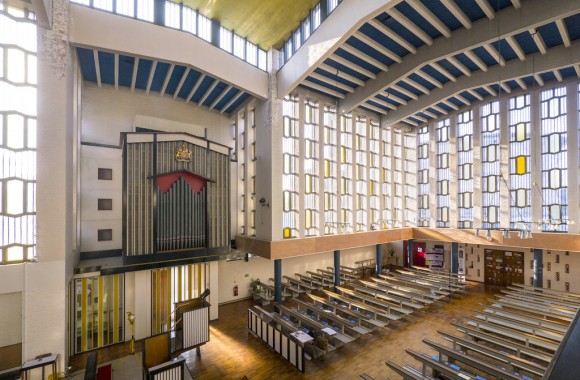 Last December I spoke at a Historic England conference on 19th and 20th century parish church interiors. These come up in our casework surprisingly often, so I had plenty of examples to share with the conference. The main aim was to highlight the variety and interest of the churches that fall within our period, especially as most of the other papers dealt with Victorian churches.

My selection ranged from WWI memorial fittings inserted into a medieval church, and a ‘Wren’ church completely rebuilt in facsimile after bomb damage, to post-war modern churches designed as complete ensembles with all their interior fittings. It was particularly pleasing when my image of St Paul’s Harlow (Humphreys and Hurst, 1957-59, Grade II) raised an audible gasp! We are consulting with St Paul’s over various repairs and potential alterations to their very complete and beautiful church.

As I have just started DPhil research into inter-war church design, the conference was a chance to showcase some interiors from this under-rated period. The stark and plain brick exteriors often give little idea of the quality of the space within. It is often said that the best examples of this era are listed and therefore ‘safe’, but they are still very vulnerable to unsympathetic internal alterations, so that intact ones become even rarer. One architect whose work I didn’t have time to mention was Sir Walter Tapper (1861-1935), but the fate of his churches is typical of many from this period.

In the course of his career, Tapper was cathedral architect for York Minster, Surveyor to the Fabric for Westminster Abbey and President of the RIBA from 1927 to 1929. He designed a number of typical Edwardian and inter-war four-square brick churches whose interiors reveal his considerable talents with fixtures, fittings and colour. Sadly, his churches have not been well-treated: several have been demolished, such as his first church, St Erkenwald, Southend, while others have lost their distinctive interiors. Surviving work by Tapper is now rare, and worthy of particular care. Two of his churches have been recent cases for us. St Mary’s, Harrogate (1915-16, Grade II*) was made redundant in 2006 and is currently on HE’s buildings at risk list. Externally it is of a traditional Gothic style, featuring beautiful windows with reticulated tracery, while inside the chancel and chapel are decorated with his usual attention to detail. The interiors have only partially survived, but there is hope that this church will not be completely lost. Several other uses proposed in the past, such as a health spa, have not been realised. Current proposals to use it as an architect’s office are perhaps more sympathetic to the surviving fabric.

The fate of another Tapper church, Our Lady and St Thomas of Canterbury, Gorton in Manchester (C of E, despite its unusual dedication) is nothing like as secure. Built in 1926-28, it is Romanesque in style, featuring sheer planes of bare brick on the outside. Inside is one of his most interesting surviving ensembles, including a large rood loft dividing the nave and chancel, a striking yellow and white-veined marble baldacchino with pyramidal roof supported on four Ionic columns with entablature, and an altar made of the same yellow marble set in panels. It is listed at Grade II, mainly for this internal interest. Made redundant and sold by the Diocese to the Ethiopian Orthodox Church, it has now become surplus to their requirements. We have contacted the Church Commissioners to raise our concerns, as it is now for sale as a development opportunity.

Most of the churches that feature in our casework have ensemble interiors of obvious significance, but increasingly we are finding that significant fittings inserted into an older church are at risk. These are often not detailed in listing descriptions, and thus poorly understood. The trend towards finding new and flexible uses for churches put these interiors at risk unless we can get involved at an early stage. We have met with the Dioceses of both Anglican and Roman Catholic churches, and responded to the consultation on the Church of England’s latest building strategy report. We hope that a meaningful dialogue can be established to consider the future of the interiors of all churches in our period.