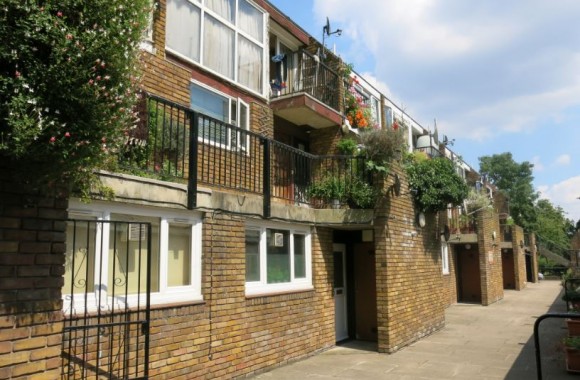 The ‘social art’ of architecture

I was intrigued when the BBC asked me to take part in a programme filmed at the Red House in Bexleyheath; this Arts & Crafts masterpiece designed for William Morris is not usual Society territory. As part of a series on C20 council housing presented by Dan Cruickshank (to be screened later this year), the programme focuses on the little-known fact that the highly-regarded public sector architect Edward ‘Ted’ Hollamby and his wife Ursula lived there for nearly 50 years. I jumped at the chance to talk about this chapter of the house’s history.

The Red House was designed in 1859 by Philip Webb, in the spirit of Morris’s ethos of craftsmanship and artisan skills. It became a national showcase for the Arts & Crafts movement. The National Trust has owned and managed it since 2003, following Ursula’s death. Although most visitors are drawn by its Morris associations and Arts & Crafts significance, its 20th century history is also remarkable.

Ted Hollamby (1921-99) was senior architect at the LCC and then director of Lambeth’s architecture, planning and development department. He studied at the Hammersmith School of Arts and Crafts and was a devotee of Morris. He believed in good design, art for the masses and social improvement – for him, architecture was a ‘social art’. When the Red House came on the market in 1952, Hollamby bought it with another LCC architect, Dick Toms, and their two families – with six children in total – shared the house. The building, having been requisitioned by the government during the war, was in a dilapidated state, and the new owners began a meticulous refurbishment and repair programme.

Hollamby admired the early LCC Boundary Estate in East London, built in the 1890s in the Arts & Crafts style, and saw his work as continuing this tradition, as well as embracing the modernist trends of the time. When Gregory Jones, a colleague of Hollamby’s and a card-carrying communist, moved into the Red House as a lodger in 1954, the house became the de facto headquarters of a unique strain of ‘soft’ British modernism that referenced the progressive Swedish housing programmes of the 1940s and paid careful attention to scale, materials and landscaped settings.

While living at the Red House, Hollamby moved from the LCC to the London Borough of Lambeth, where he became Director of Planning, Architecture and Design from 1969 to 1981. His tenure saw some of the most progressive social housing projects in the capital, including estates like Cressingham Gardens in Brockwell Park and Central Hill in Gypsy Hill. His fundamental aim for these low-rise, high-density, brick-built developments was to provide high quality social housing and open space, ‘fit for ordinary people’. A number of these ambitious social housing developments are now threatened with re-development, and have become major cases for the Society.

Cressingham Gardens (1967-79) was designed to blend seamlessly into its setting, the adjacent Brockwell Park. The new homes were woven around existing mature trees and the scheme incorporated visual ‘green tongues’ from the park into the heart of the development. The flats were carefully designed to be bright and spacious, with generous private outdoor space. In 2012, we were contacted by local residents concerned about plans by Lambeth Council to demolish and rebuild the site, and strongly supported a listing application to protect and celebrate its qualities. The application was turned down, to our surprise and disappointment, but the battle to save the development continues.

Central Hill (1967-74) has tiers of elegant brick terraces stepping down the steep ridge of Central Hill, with the height kept low so that the tree line is unbroken. Floor-to-ceiling glazing gives residents breath-taking views over London, and all the flats have ground-level front doors reached by paved paths along the contours of the hill. Cars and pedestrians are separated to make it safe for children to play. With a variety of housing types to suit different lifestyles and age groups, the aim was to create a genuinely integrated community.

On our several visits to Central Hill, residents have praised this sense of community, and shown us round their spacious flats with pride. One told us: ‘To me, it’s the atmosphere of the place. The reflection of the sky and trees on the smoked balcony glass is wonderful. When the wind blows on a summer’s evening and you look along the flats hugging the contours of the hill, it could be a modern Italian hill town.’

Lambeth says that maintenance costs have become too high, and wants to increase the number of dwellings on the site to help meet housing targets. Here, as at Cressingham Gardens, they are considering a number of options, including complete demolition and redevelopment. We saw banners in windows protesting at possible eviction, and demonstrations have been held outside the Council offices. We are supporting local people fighting to save their homes and the natural beauty of the estate.

Hollamby thought the LCC too distant from the people it served, and at Lambeth held exhibitions, consultations and meetings on major or controversial schemes. ‘We want [the public] to be involved, to complain, to argue, to come rushing down to the Town Hall every time they have a legitimate grouse’, he explained to the RIBA Journal. He would be encouraged to know that residents of both of these threatened estates are doing just that. Our listing application for Central Hill is currently being assessed by Historic England, and a decision is expected from the Secretary of State this spring.