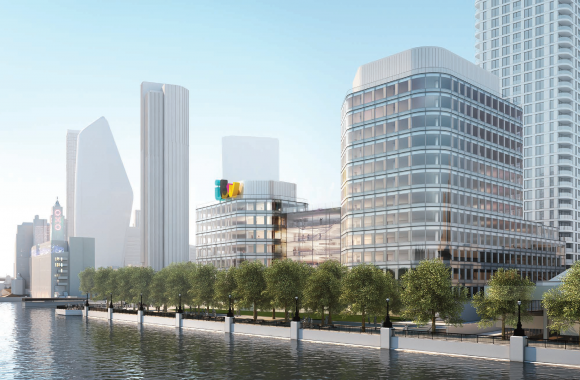 Plans to redevelop the HQ and studios of broadcaster ITV on London’s South Bank will seriously compromise one of the most important riverside sites in London, with a harmful impact on the setting of the Grade II* National Theatre, says the Society.

The scheme involves the demolition of the London Television Centre and the construction of two new buildings up to 14 and 31 storeys to provide television studios, offices, residential accommodation and shops.

In its letter of objection to Lambeth Council, the Society says it considers that the proposed new development will cause harm to the character and appearance of the riverside, which is also a conservation area, and to the neighbouring buildings. This is due to its greatly increased scale and the massing of the proposed building which fails to correspond to the strong architectural horizontality of the neighbouring architecture; its extensive and generic use of bland glass curtain walling, and the poorly considered way that the building relates to the riverside at Queens Walk. They consider that the new building will present a massive and impenetrable frontage to a prominent riverside location that is successful and significant due to its permeability and sense of openness.

The proposed development, by Hopkins Architects, would also impact on long and short views of the Grade II* listed National Theatre – in long views it will entirely obscure the theatre from the Blackfriars Bridge, and will dominate the theatre’s landmark silhouette and the IBM Building through its increased height and generic design as the site is approached from the west along the South Bank itself.

Tess Pinto, Conservation Adviser at C20, said: “The reason the South Bank was given Conservation Area designation in 1982 was in part because of the national and international importance of many of the C20 buildings it contains, but also because of the spaces around the buildings, particularly the riverside walk, an area of great amenity value. They provide access to the river; an important pedestrian route; an area that can be read in conjunction with the arts complex; and attractive views of central London.

“While the existing TV centre did not meet the criteria for listing, Historic England recognised the robust elegance of the building.  The neighbouring IBM Building is currently unlisted but C20 considers that it is a building of major significance and a potential candidate for listing.

“It is important to ensure sensitive changes to existing buildings and spaces, and that any new development is of appropriate quality to the status and appearance of the area. This is not the case with this proposed new development which we feel would seriously compromise the special qualities of the area.”

The council is due to decide on the scheme at a meeting on 6 February.  The planning committee has recommended approval. The Society says there is still time for members of the public to contact the council to voice their objections.

Meanwhile, a more sensitive development on the South Bank, is the refurbishment of the Hayward Gallery by Feilden Clegg Bradley Studios which our Director Catherine Croft has reviewed for the Architects Journal.  In comparison with the scale and ambition of so many of the aborted schemes to reinvent the Brutalist buildings of the South Bank, says Catherine, this refurbishment could be seen as a bit of an anticlimax. It would be an enormous pity if that were to be the case, as it is in fact an exemplary update. Read her full report here.