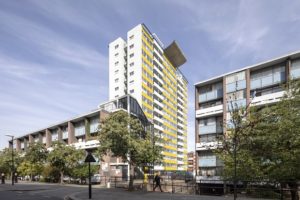 Above and below: Great Arthur House, Golden Lane Estate (both pics: Peter Cook) 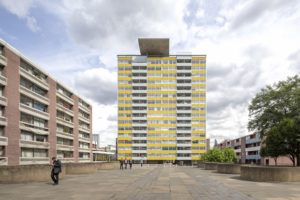 It’s always good to see a positive outcome, and C20 Society is very pleased with the renovation of Great Arthur House in the Golden Lane estate by John Robertson Architects. We consulted closely with the design development of this landmark building, which is close to our Smithfield headquarters, and the architects’ respectful approach has paid dividends.

By Chamberlin, Powell & Bon, Great Arthur House’ (1957, Grade II) single-glazed curtain wall system had deteriorated. It has been replaced with a matching double-glazed façade that brings its environmental performance up to date. The building’s striking yellow glass bands, resplendent on both east and west elevations, were carefully replicated with a bespoke system that matched its original golden yellow ‘muro’ glass.

It also upgraded the building’s structure itself, as 15-storey Great Arthur House was built during an era of post-war austerity. JRA found that the floor slabs had no spare loading capacity, so the firm collaborated with engineer Mott MacDonald to strengthen the structure with galvanised steel plate, offering a means to hang the replicated curtain wall panels in safety. A big feature of the building has been its concrete canopy, described by Pevsner as the first time that “purely expressionist motifs appeared in London”. Most remarkable yet is that the renovations were done without the residents having to move out.

See more on our June 1 walk, Tale of Two London Estates: The Golden Lane and The Barbican. Led by David Rosenberg, it will take in Great Arthur House in its wider social, spatial and architectural context.