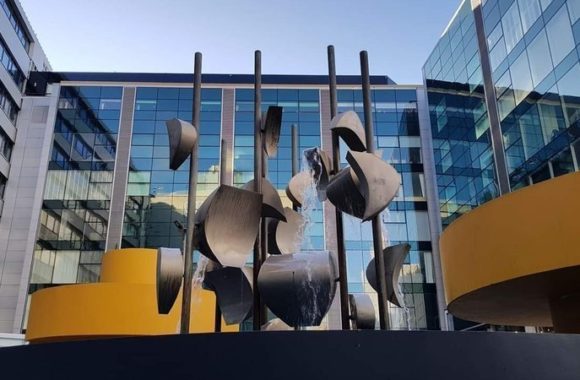 We were delighted to see nine twentieth century buildings and structures making the news over Christmas and the New Year as Historic England published its 21 highlights of 2019 to gain protection or have their listings upgraded.

Focussing on the ‘fascinating and quirky’, HE’s C20 selection ranged from a K1 telephone box and lych gate and coffin rest to an aviation vertical spinning tunnel and First World War practice trenches.

C20th architecture is often under valued, losing out to more easily understood building periods such as Victorian and Georgian, and so it is heartening to see C20 architecture achieving greater prominence and appreciation.

We were particularly pleased to see Liverpool’s Piazzo Fountain and the K1 telephone box, both listed at Grade II, on HE’s top 21 pick list, as we had supported these listing applications.

Known locally as the Bucket Fountain, the kinetic water sculpture was made in the late 1960s by renowned Welsh fountain designer Richard Huws and is the only surviving example of his water sculptures. The design is based on a prototype which Huws designed for the Festival of Britain in 1951 – a national celebration to unite the country after the Second World War.

The K1 telephone kiosk, which is located alongside a weir at Newsholme Dean, near Keighley, West Yorkshire, was Britain’s first national telephone kiosk and only a handful survive The kiosk, thought to have been designed in 1922, was moved from its original location and re-purposed for use in the mid-20th century as a housing for water-flow measuring equipment. C20 has long been a champion of the telephone kiosk, running several high profile campaigns for the K2s and K6s.

Also in the limelight was the former HQ of the Pearl Assurance company, a striking Post Modernist building in Peterborough, listed at Grade II following a C20 submission, along with the 25 acres of landscaped grounds which were added to the designation register. Designed by Chapman, Taylor Partners and constructed between 1986 and 1992 to accommodate 2,200 staff, the building is vast in scale with three square blocks of open plan offices, each three storeys high, with an open –sided atrium, an attached computer hall, a 600-seater restaurant and training centre and two decks of underground parking. The designed landscape by Professor Arnold Weddle features lakes, a memorial garden, entrance courtyard, physic garden, parterre garden, pyramid, wildflower meadow and ziggurat.

Other C20 structures included:
• The Porchester Centre in Bayswater, London, an unusually elaborate civic building of the 1920s, was upgraded from Grade II to Grade II*. The centre’s Turkish bath complex is now exceptionally rare, and the opulent main hall was famously featured in Monty Python’s ‘The Meaning of Life’, with the Mr Creosote sketch filmed here in 1982.
• Sandford Parks Lido, listed at Grade II, is a remarkably intact example of a 1930s lido in the Arts and Crafts style. It was built in 1934-1938 for Cheltenham Borough Council and was designed by Borough Engineer G Gould Marsland with the advice of landscape architect Edward White.
• Listed at Grade II, the Vertical Spinning Tunnel, at Milton Ernest, Bedfordshire, was a specialised facility to investigate aerodynamics and flight systems. Built between 1948 and 1955, it is a well-preserved example of a very rare building type. It worked by blowing air upwards against the gravitational force on a free-falling aircraft model, allowing the study of the ways in which an aircraft could enter a spin and how to recover from it.
• First World War Practice Trenches, Tolsford Hill, Saltwood, Kent, Scheduled. The large-scale training of recruits prior to their departure to the Western Front in the First World War was very important and although these trenches leave few visual marks above ground, they can be understood through buried archaeology.

• The lych gate and coffin rest at the Grade II* listed Church of St Michael and All Angels at Brampton Abbotts, Herefordshire, dates from 1931 and was designed in an Arts and Crafts gothic style by leading ecclesiastical architect WD Caroe. Built of stone and timber under a stone slate roof, it forms a picturesque and welcoming entrance to the medieval churchyard. Grade II listed.

• Second World War practice bombing range indicator and observation post, Putsborough, Devon, Grade II listed. The north Devon coast was one of the major training centres for allied troops in the run up to D-Day. Structures related to this are a bombing range target indicator and associated observation post. They are considered to be the only two survivors of their kind in Devon.