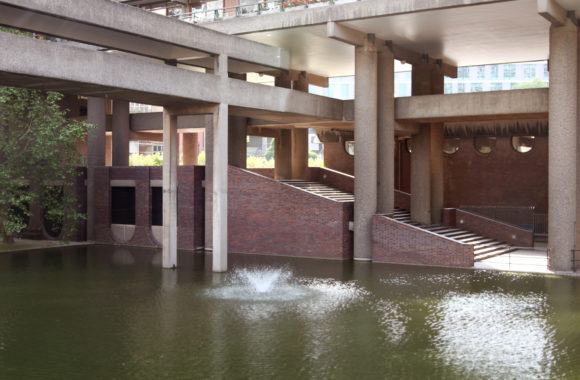 We welcome the recent news that the City of London School for Girls has decided not to progress with controversial plans by Nicholas Hare Architects to expand within the Barbican estate which would have caused substantial harm to the internationally celebrated architectural masterpiece.

The threat to the Barbican estate, designed by Chamberlin, Powell and Bon and built between 1962 and 1982, has not disappeared forever. Although the school’s board of governors has decided not to take the current plans further, they have stated that there is still a need for expansion in some form.

C20 Society caseworker Grace Etherington said: “We strongly supported the Barbican Association’s opposition to the expansion plans, objecting to the proposed infilling and rooftop extensions, which would have terminated key views through the estate.

“The plans constituteda great threat to the architectural significance of the Barbican, and we didnot view the perceived benefits to the school as sufficient justification for the substantial harm these changes would have brought. It is commonplace for independent schools to be spread across more than one site, with different age groups occupying separate buildings. The redevelopment of the Museum of London offers an opportunity for the school to design a space to suit their needs while still being connected to the Barbican’s highwalks. The Society were disappointed that alternatives such as this were not considered, particularly as the school’s preferred option was so damaging to the listed building’s significance.”

The School was built between 1963 and 1969, and is Grade II listed, as are all other buildings belonging to the Barbican. The Gardens and open spaces throughout the Barbican are separately registered at Grade II*.

The scheme also proposed to add a new two-storey building by the water opposite St Giles’ church, and to build a rooftop extension on one of its existing buildings to provide extra space for the sixth form.

Grace said: “The Barbican is celebrated not just for its architectural distinction, but also as a masterpiece in spatial planning, where a wide range of uses are successfully integrated into a dense urban area whilst imparting a sense of openness and spaciousness.  Viewing the purposefully-designed open spaces within the Barbican as opportunities for development is a complete misinterpretation of the estate’s character. These spaces are irreplaceable contributors to this unique urban environment and infilling them would be very damaging, both in this instance and elsewhere across the estate.

“The Barbican is internationally celebrated as a complete architectural masterpiece, and the open spaces and views between, above, under and through buildings are a key aspect of Chamberlin, Powell and Bon’s design. Picturesque views of buildings and landscapes are deliberately framed, and perspectives constantly change as visitors and residents move through the Estate.”

C20 Society and the Barbican Association will remain vigilant regarding any future plans affecting the estate.