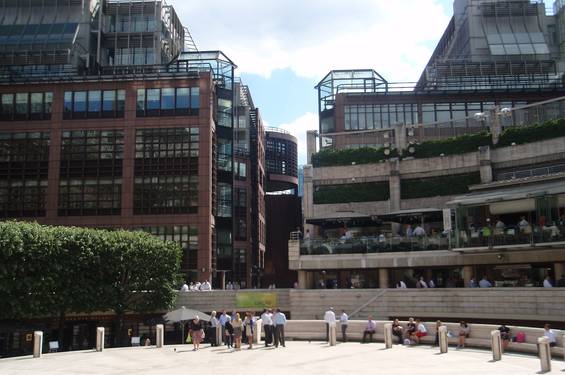 Broadgate embodied the brash city culture of the 1980s but is now threatened with demolition, just as it is being considered for listing. The complex is an example of the problems of listing buildings from the 1980s.

The scale and style of the Broadgate, a ring of banking offices surrounding an outdoor amphitheatre where city traders could carouse, exemplified the brash confidence of the  city in the 1980s. Designed by Peter Foggo, the complex was opened in 1985.

It is now embroiled in a dispute between developers British Land and Blackstone, who want to replace two of the buildings with new headquarters for Swiss bank UBS, their architect, Ken Shuttleworth and defenders of the original buildings.  As reported in the Guardian, the original developers have criticised the proposed new buildings as “an environmental disaster”, while Shuttleworth claims his design “heralds a sea change in modern architecture” and city planners have suggested that Foggo had reservations about the stone elevations, claims that are vigorously contested by his widow.

The row highlights the difficulties over preserving the best buildings of the 1980s, many of which are coming into their own, but can still only be listed if they are threatened with demolition, because of the 30-year rule. Buildings such as Lloyds of London (Richard Rogers, 1981) and the Queen Elizabeth Conference Centre (Powell and Moya, 1982) are now being considered for listing. The Society views Broadgate as a very successful example of architectural contextualism, a design approach that was to become particularly popular in the course of the 1980s, and therefore a key representative of its time. “Broadgate is symbolic of the decade and whatever you think of the era, it was done to a very high standard,” said C20 director Catherine Croft, lobbying for its preservation. “Its American influence is shown in its postmodern architecture, sequence of public spaces which are privately owned, and its sense of private rather than public patronage.”

The society’s submission to English Heritage claims: “Broadgate remains, in architectural and planning terms, the most significant and successful commercial development in London of the post-war period.” English Heritage is expected to make its recommendation to John Penrose, the heritage minister, at the beginning of June.