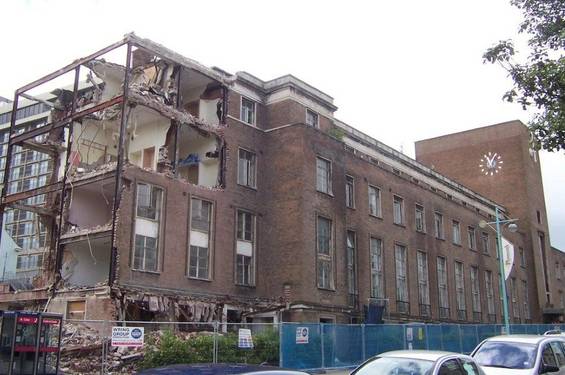 University of Plymouth pushes ahead with demolition of post-war masterpiece

The Twentieth Century Society is deeply concerned about the future of the former NAAFI building in Plymouth, also known as the Hoe Centre. Noted on Plymouth City Council’s Buildings at Risk Register as being of townscape merit, the building narrowly missed being listed in 2006 and is now facing demolition.

Owned by the University of Plymouth, who have had a good track record of dealing with historic buildings, the NAAFI is one of the last surviving buildings of its type in the country and is a key element of Abercrombie’s post-war plan for the city. Le Havre in Normandy, which was reconstructed according to the plan of a team headed by Auguste Perret between 1945-64 has been designated by UNESCO as a World Heritage Site. Plymouth is as good as Le Havre and needs more recognition before it is too late.

Forming a gateway to Plymouth Hoe on Armada way with the recently listed Church of Christ the King (Giles and Richard Gilbert Scott, 1961-3), the NAAFI was one of the first buildings to go up in the aftermath of the Second War. These two buildings seen together show the importance of viewing Plymouth not as a series of individual architectural elements, but as an orchestrated piece of urban design. The designed relationship between the church and the NAAFI is noted in Jeremy and Caroline Gould’s Plymouth Planned;

“(Gothic… the external effect is also Italianate, in brick to match the NAAFI) with a roman clay tiled roof and battered engaged campanile offset on the Armada Way side to balance the NAAFI across axis.”

The NAAFI building is currently being assessed by English Heritage for listing and many local people are supporting the campaign to save it. The Society has urged the City Council and the University of Plymouth to halt work while the listing assessment is decided but as yet, no response has been received and demolition teams are back on site. The Society firmly believes that the building could be adapted to a new use to demonstrate how conservation and regeneration can work in tandem.