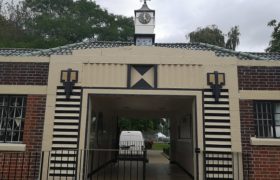 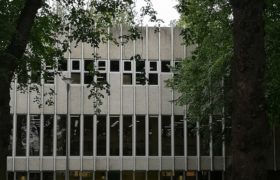 Our October trip is to Tamworth, in Staffordshire. Just on the edge of our region, Tamworth has a long and illustrious history and was the capital of the kingdom of Mercia. Ethelfleda, the daughter of King Alfred the Great, governed the kingdom in the 10th century and kept the attacking Danes away. There are a number of modern monuments to her in the town. More recently Tamworth was mentioned in Shakespeare. Our visit includes a diverted river and 20th-century pleasure grounds as well as the whole gamut of Tamworth’s 20th-century architecture: public art, memorials and stained glass, Art Deco, brutalism and post-modernism, neo-Georgian and 21st-century design. Much pre-20th century detail helps put the town into historical perspective.

We will meet at the Ankerside shopping centre under the Rotunda (by the Carphone Warehouse) at 10.30am on Sunday 13 October. You can park for free at the Ankerside car park (postcode B79 7LG) on Sundays while the railway station is about a 10-minute walk away.

We plan to stop for lunch as there is a great deal to take in so please indicate if you’d like to join us for a simple lunch (jacket potatoes, sandwiches, salads etc) as we will book a table at one of the buildings we’ll be looking at. We anticipating finishing by about 3pm.

To book please email c20westmidlands@gmail.com and let us know if you’re having lunch. £5 for members £10 for non members. You will also pay for lunch.

Our region has many important buildings – from Coventry Cathedral and its post-war city centre to the listed prefab bungalows in Birmingham’s Wake Green Road. We organise regular walking tours throughout the region to highlight and scout out famous and lesser-known examples of C20 architecture. Through casework we strive to protect the buildings that are important to all of us.

We’re a small group of volunteers and are always looking for people with enthusiasm, skills and local knowledge to join us. We meet every month in Birmingham.

If you have any news about C20 buildings, events and exhibitions or ideas for places to visit, please get in touch (please include photos or images, if you have them).