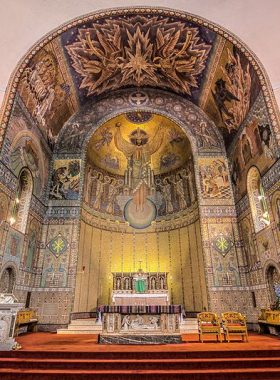 Hello, we invite you to the C20 North West Group’s summer tour. In conjunction with the Tiles and Architectural Ceramics Society, we will be holding a coach tour of five inter-war churches with extensive schemes of mosaic by the Manchester firm of Ludwig Oppenheimer, designed by Eric Newton. The firm of Oppenheimer was established as far back as 1865 in Old Trafford but it was under Eric Newton’s direction during the inter-war period (he changed his name from the Jewish-German name of Oppenheimer due to anti-German feelings in the First World War), that the firm really came into its element.

St Willibrord’s, Clayton and St Patrick’s, Collyhurst are large and dramatic 1930s Early Christian style churches of much bare brown brick with concrete domes but with beautiful and large schemes of mosaic decoration to the inside and although listed in the 1990s, deserve to be better known. For lunch we will go to the Manchester suburb of Chorlton and then we visit the nearby Our Lady and St John, a traditional decorated gothic church of 1927 but with one of the most lavish schemes of full-wall Newton decoration to the inside floors and fresco-like in its depictions of scenes from the Book of Revelation and stained glass by Meyer of Munich. We will then visit St Joseph’s, Heywood a brick basilica of 1916 by the promising architect, Henry Oswald Hill, who was killed during the First World War. Finally to St John the Baptist, a vast church with a large and early concrete dome, designed before 1916 by Henry Oswald Hill but erected after his death in 1927 by Ernest Bower Norris. Here, the massive scheme of mosaics show depictions of heaven and hell in golds and blues and a massive Christ in Majesty rises over the altar in a semi-dome. Austere on the outside, these Roman Catholic Churches are delightful boxes of exotic jewels to the inside, unusual for British churches of this age and this will be a special opportunity to visit them all in one day.

Travel: We meet at 10am on Fairfield Street by the taxi rank for Manchester Piccadilly Station. We aim to return there around 5pm.

Price: This coach trip will cost £25, pay on the day, notes will be included.

As this is a coach trip, places are limited, please email North West C20th Society to book your place

The C20 North West group covers all parts of North West England: Cheshire, Cumbria, Greater Manchester, Lancashire and Merseyside. The group currently meets every twelve weeks in Manchester city centre and also organises local events. Acting as the eyes and ears of the Society in the region, the group works closely with the Society’s caseworkers, as well as other similar heritage groups locally and is a member of the Liverpool Heritage Forum.

Notable post-1914 landmarks in the North West include: Liverpool Anglican Cathedral (not completed until the 1970s) and its counterpart, the Roman Catholic Metropolitan Cathedral; Manchester Central Library and Town Hall Extension and Preston Bus Station, which was finally listed Grade II in 2013 after a long-fought campaign by the Twentieth Century Society and others.

Contact: New members are warmly welcomed, and for queries about cases in the North West please email C20 North West.