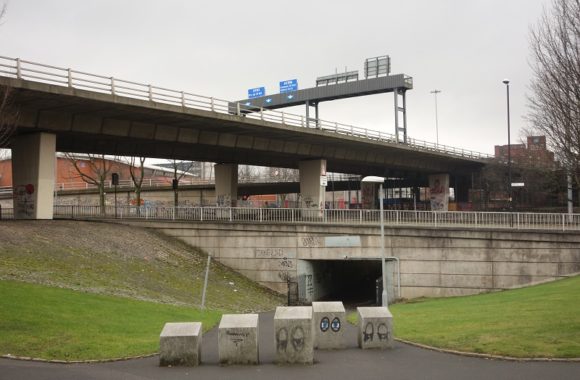 Jonestheplanner (Adrian Jones and Chris Matthews) take an irreverent and perceptive look at recent architecture and planning decisions in Manchester. They explore the character, architecture and urban design of what aspires to be England’s second city and consider the influences shaping its planning and transport policies.  These include the ‘Northern Powerhouse’ and ‘devoManc’, as well as the process and politics of development and regeneration. Drawing from the experience of other major cities they suggest that despite the impressive scale of new development, Manchester is really not being ambitious enough about its future.

Adrian Jones is a town planner and urban designer, formerly Director of Planning and Transport for the City of Nottingham and member of CABE’s national Design Review Panel.   Chris Matthews is a local historian and graphic designer whose wry photographs reveal the unexpected in the urban landscape.  They jointly blog as www.jonestheplanner.co.uk and published Cities of the North (Five Leaves Publications, 2016).

C20 members and  non-members welcome.  £8 (no concessions) at the door.

The C20 North West group covers all parts of North West England: Cheshire, Cumbria, Greater Manchester, Lancashire and Merseyside. The group currently meets every twelve weeks in Manchester city centre and also organises local events. Acting as the eyes and ears of the Society in the region, the group works closely with the Society’s caseworkers, as well as other similar heritage groups locally and is a member of the Liverpool Heritage Forum.

Notable post-1914 landmarks in the North West include: Liverpool Anglican Cathedral (not completed until the 1970s) and its counterpart, the Roman Catholic Metropolitan Cathedral; Manchester Central Library and Town Hall Extension and Preston Bus Station, which was finally listed Grade II in 2013 after a long-fought campaign by the Twentieth Century Society and others.

Contact: New members are warmly welcomed, and for queries about cases in the North West please email C20 North West.