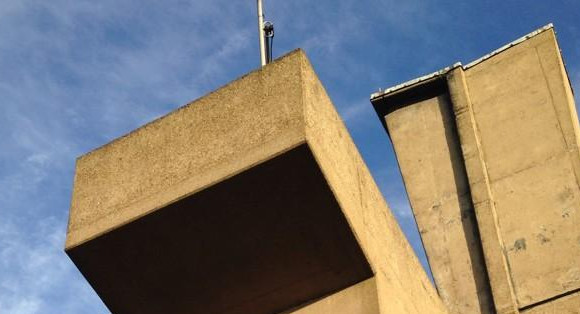 ‘Make no little plans, they have no magic to stir men’s blood’ – Daniel H Burnham

Thank you to everyone who attended our January meeting at Sheffield’s Rutland Arms. Nineteenth and twentieth century architect and urban designer Daniel Burnham would no doubt have been pleased by the big plans we debated for 2015 and that we managed to set a total of three dates for future events, including our February meeting.

We were also pleased to welcome Chris Matthews to the meeting, who had travelled from Nottingham to be with us and who is currently in the early stages of establishing a C20 regional group for the East Midlands.

With English Heritage recently announcing the listing of fourteen 1970s office buildings at Grade II*, some of our events are particularly topical. See Events for what we have planned for  February.

It was agreed at the January meeting to draw a line under our 2014 campaign to save Sheffield’s Castlegate Tower (pictured above).

Demolition contractors Hughes and Salvidge have now been appointed to take down the entire Castle Market site, including the tower. Here is an extract from the January 2015 edition of Castlegate News…

“The entire Castle Markets complex along with the former Transport Canteen on Castlegate will be demolished down to floor slab level as well as the bridges over Exchange St which formed part of the Galleries and the Turret cafe. The Castle ruins will remain covered by these slabs until funding for their investigation has been obtained.”

The deadline for registration for this year’s Heritage Open Days is just a few months away and to boost the number of twentieth century buildings on the list we’d like you to suggest suitable locations in the Sheffield City Region. Simply reply to this email with your suggestions and we’ll raise them at February’s Heritage Open Days committee meeting.

The C20 Yorkshire group covers all four counties of the Yorkshire region. It was established at the 2014 Twentieth Century Society AGM and currently meets every fourth Wednesday of the month at the Bath Hotel, Sheffield. The group has connections with Sheffield Civic Trust and the Sheffield School of Architecture.

Yorkshire is home to many significant and unique twentieth century buildings. Among these are Sheffield’s Grade II*-listed Park Hill flats (currently undergoing regeneration by Urban Splash) and the Grade II-listed Emley Moor tower.

The region also has its fair share of ‘lost’ buildings (Sheffield’s Castlegate Tower among them), so it is important that, through the C20 Yorkshire group, we create a network of individuals who can help keep the C20 Society informed of buildings at risk.

Contact: If you would like to become a member and be kept informed of future group events, please email Andrew Jackson and follow @c20yorks on Twitter. Andrew studied at the Liverpool School of Architecture and is a Trustee of Sheffield Civic Trust.