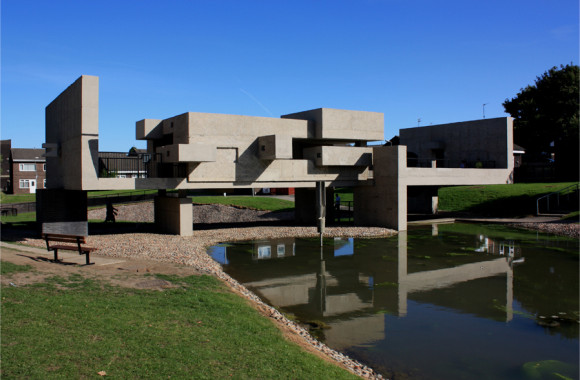 The exhibition ‘Peterlee: an experiment in total environment’ at (featuring work by Victor Pasmore, Toby Paterson and John Topping – see last C20 magazine) closed its doors on 3 March 2013.  The show was a great success, attracting the attention of the architectural community as well as the arts (both locally and internationally), and provided an interesting platform to reassess Pasmore’s legacy at Peterlee.  Amongst the many visitors were artists Peter Geschwind (also Professor at the Royal Institute of Art, Stockholm), Thomas Elovsson and Maria Lind (Director of Stockholm art gallery Tensta Konsthall), whom we gave a guided tour of the exhibition, and who will be ‘reconstructing’ sections of the Apollo Pavilion as part of an exhibition at Tensta Konsthall this autumn (Hartlepool Mail – Swedes size up Pavilion).

The ‘Peterlee: an experiment’ project continues with artist Toby Paterson currently planning the installation of permanent artworks at Peterlee schools/colleges over the summer, a permanent exhibition opening at East Durham College in September, and a publication by art critic/writer Sam Gathercole to celebrate the entire project early next year. The Pasmore estate has kindly donated plans and drawings from the project to the archive at the Durham Records Office, including some exciting discoveries (more on that to be revealed soon…).

The day we showed the Swedish contingent around the DLI exhibition, we were contacted by Alessandro Vincentelli (Curator of Exhibitions & Research Baltic), inviting us to the ‘Revisiting Form:  Architecture, Socialism, Modernism’ seminar – coincidentally, Alessandro had just returned from a visit to Tensta Konsthall that weekend.  The event, on 12 April, designed to complement the current Baltic exhibition, David Maljkovic: Sources in the Air, examined the legacy of modernist utopian architecture and design from the 1950s-70s in the former socialist Yugoslavia.  Speaking were architectural writers (and well-known fans of modernism) Owen Hatherley and Agata Pyzik, as well as artist Matt Ozga-Lawn and Nic Clear of the University of Greenwich.

During a break at the seminar we chatted briefly with Owen and Agata only to discover they’d never been to the Apollo Pavilion before (with Owen complaining ‘There’s no train station in Peterlee – that’s the problem!’), and so we offered to run them down the following afternoon.  The weather wasn’t at its best (spitting onto rain and somewhat lacking light/shadows), but arguably the Pavilion’s stark (north)eastern block appeal was at its most pronounced.  Afterwards we ran them up to Killingworth (what’s left of it… Norgas House and its computer building have now sadly been completely demolished with Stephenson House soon to follow) and stopped off to get shots of Ryder and Yates’s Engineering Research Station (below) and Ralph Erskine’s Lakeshore Housing. 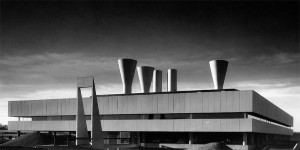 Owen was disappointed to learn he’d be unable to pay a final visit to Derwent Tower (aka the Dunston Rocket, Luder & Partners, 1973), which has now been demolished.  As the concrete-crunching machinery currently chews its way through the northeast, on the site of Luder’s Trinity Square, Gateshead’s ‘New Tescopolis’ looms and grows ever-closer to completion.  We have recently lost The Musketeer in Forest Hall, North Tyneside – a striking example of a modernist public house (c.1969) by Waring & Netts, demolished to make way for a new Aldi.  Also by Waring & Netts, Whitley Bay Library (1966) now stands empty.  Newcastle’s central motorway (including the Swan House roundabout and adjacent architecture) makes it one of the most radical and ambitious schemes of the sixties and maybe the strongest expression of T. Dan Smith’s vision for a ‘Brasilia of the North’, however the levelling of Fitzroy Robinson’s former Bank of England has left a large gap in the composition.  With plans for more shopping this space is now sadly being eroded and the bobbly glass and steel draws ever-closer.

Thankfully Faulkner Brown’s wonderful Jesmond Library now appears to have been saved from closure after it was announced that a community partnership has been formed to take over management of the building.

Also on a lighter note, in his presentation at the Baltic event, Owen referenced a sculpture by Charles Sansbury in Merthyr Tydfil.  Coincidently Sansbury also created a piece for Killingworth that once adorned the side of the original shopping centre over the main road.  The work was a representation of a locomotive built by Stephenson at Killingworth and was thankfully saved by locals when the old shopping centre was demolished in the nineties.  Since then it has lain in storage (in pieces) at North Tyneside’s Stephenson Railway Museum, where we first happened upon it.  In January 2012 we wrote to local councillors proposing that the artwork be restored to celebrate both the 2014 bicentenary of Stephenson’s first locomotive built at Killingworth, and also Killingworth’s ‘new town’ heritage (for which the sculpture was commissioned).  Following this and a campaign by the Killingworth Local History Society, we’ve recently had the fantastic news (Chronicle: ‘Killingworth back Blucher train sculpture‘) that North Tyneside Council are conducting a feasibility study and preparing to apply for Heritage Lottery Fund cash to have the work reinstated in the town.