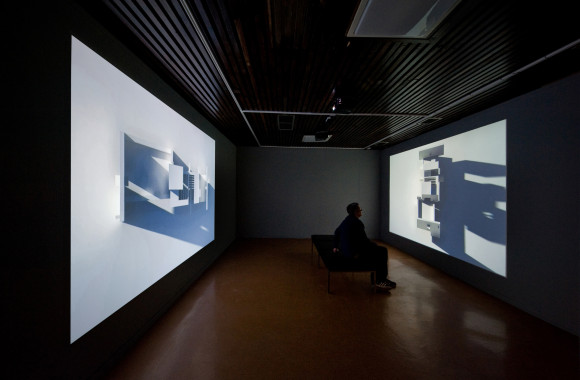 Realtimelapse, a video installation by John Topping based on Pasmore’s Apollo Pavilion has opened at the Hatton Gallery in Newcastle-upon-Tyne, and runs until 21 December 2013

Realtimelapse presents two animations of a virtual sun passing over a digital model of Victor Pasmore’s Apollo Pavilion, an iconic example of 1960s public art in Peterlee, County Durham. One animation is set on the winter solstice (21 December) and played in real time, giving it the appearance of a still image. The other is set on the summer solstice (21 June) and is speeded up in timelapse fashion, a period of 24 hours flashing before the viewer in a matter of minutes.

John Topping said: “Raised in Killingworth, a 1960s new town located east of Newcastle, I was greatly influenced by its architecture. Driven by the sense of loss brought about by the demolition of the estate in 1987, I have since been compelled to seek out and explore places that share Killingworth’s Brutalist character, an aesthetic that often divides opinion, but which for me evokes emotions associated with home. This is what first drew me to the Apollo Pavilion in Peterlee”

Originally commissioned by DLI Durham Museum and Art Gallery, Realtimelapse is now being shown as part of the Northern Design Festival 2013 which will take place in venues throughout Newcastle, Gateshead & Sunderland. Northern Design Festival’s theme for 2013 is Create:Digital. On show alongside Realtimelapse is a collection of 1960s artworks which coincide with the building of the Apollo Pavilion selected from the Hatton Gallery’s collection. Featuring works by Victor Pasmore, Eduardo Paolozzi, Richard Hamilton and Alan Davie.