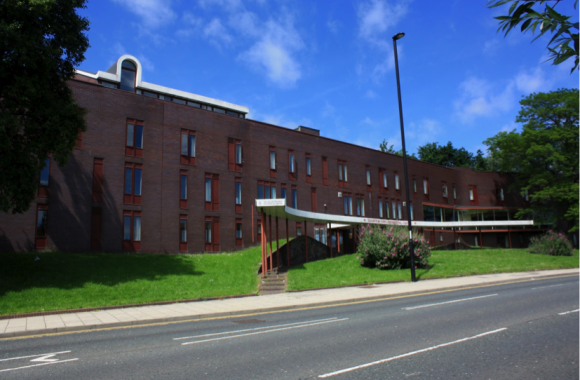 Some good news for Ryder & Yates fans! Following on from the listing of the R&Y practice office in October 2014 and MEA House in January 2015, the main accommodation range of the Salvation Army Men’s Social Services Centre (1974) by Ryder & Yates was listed at Grade II on 26 June 2015, after an application by C20 and the NE Group.

Historic England described the elegant purple brick building on City Road, Newcastle (just along from the former site of Studio 4 Tyne Tees building, demolished in 2010) as a ‘significant welfare building with a highly distinctive character incorporating several distinctive features and reflecting its high order of design quality and execution’.

Ryder & Yates themselves were hailed as ‘… one of the most important post-war regional firms in England, whose work on buildings for healthcare and welfare demonstrate how modern architecture could serve the needs of the community in the tradition of Lubetkin and Le Corbusier, two of the greatest influences on the practice’.

The lack of alteration at the Sally Army building played a large part in the listing decision – aside from the replacement of window glass and the removal of original concealed shutters the exterior is unaltered and the interior retains its original plan.

Historic England were also convinced of the importance of the building’s setting, acknowledging ‘its curving external form articulates the rising and curving street’ and agreeing that ‘the incorporation of a penthouse roofline references the adjacent early-C18 Keelman’s Hospital with its domed clock tower’.

The SASSC has served the needs of vulnerable and homeless people in Newcastle since it opened, but sadly closed its doors on 30 June 2014.