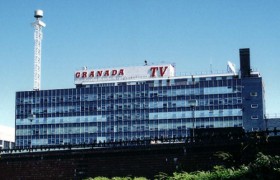 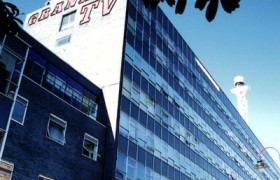 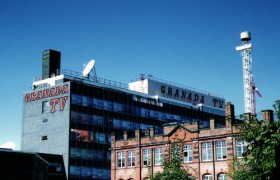 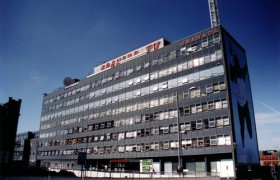 Words and pictures by Eddy Rhead

Since the merger of the two television companies Carlton and Granada, rumour has been rife in Manchester as to whether or not Granada will move operations to London. If Granada, for whatever reason, does leave its home in Manchester there will be increased pressure from developers to demolish the unlisted Granada House, with new developments rapidly rising up around Granada in this once unattractive part of town.

The Granada building is important chiefly because the architect on the project was Ralph Tubbs; perhaps best known for his work on the 1951 Festival of Britain, with his design for the Festival’s centrepiece, The Dome of Discovery. Tubbs is part of a rather neat Festival of Britain – Manchester connection. Hugh Casson, Misha Black and Ralph Tubbs led the main planning and execution of the Festival on the South Bank. Hugh Casson was responsible for one of Manchester’s most impressive post-war buildings: the former National Westminster Bank building on King Street built in 1966. Misha Black was responsible for the interiors at the Co-operative Insurance Services Tower built in 1962, while Tubbs, starting in 1956, designed the Granada offices.

Thanks to his work at the Festival of Britain, Tubbs’ reputation was already assured when Sidney Bernstein, Granada’s flamboyant chairman, commissioned him to design an office and studio complex for his new venture: Granada Television. The former industrial site that Bernstein had found on Quay Street was chosen after other sites, on land opposite Victoria Station and at the former Manchester racecourse, had proved too expensive. As was characteristic of Bernstein, he took an active role in the design of his building. By all accounts a skilled draughtsman himself, he would spend a great deal of time preparing his own elevations and studying Tubbs’ plans in detail.

Granada House was one of the first buildings in the city to be constructed using the curtain wall method. The initial stage of construction was the low two-storey building on New Quay Street, with the larger eight-storey Granada House added later. The outer skin of the building is of light grey granite walls with the main facades glass, with their highly polished black gabbro sills, separated by white marble and grey limestone supports. High building standards have meant little or no renovation has been needed to the façade of the building, leaving the original outside fabric unaltered.

Also of some historical significance is that Granada House was the first commercial building to be built in the city after the war. That Bernstein chose Manchester as the base for Granada Television and built such a large and high quality building was crucial in Manchester’s post-war regeneration. With its illuminated sign in period typeface, Granada serves as an important landmark on the Manchester skyline. The high quality of the building, coupled with the undeniable pedigree of Tubbs – whose 1952 YMCA Indian Student Hostel, London was Grade II listed in 1996 – are important factors when considering the building’s future. But it is perhaps the cultural significance of Granada to Manchester, and to television production internationally, that is most important. The first television appearance by The Beatles, productions featuring such luminaries as Laurence Olivier and Michael Caine, outstanding dramas such as Brideshead Revisited and Jewel in the Crown, the groundbreaking World in Action programme, and of course the world’s longest running soap opera, Coronation Street have all contributed to an illustrious output from this building. Granada House is an important building in Manchester’s architectural and cultural histories and if Granada does pull out of the city we must do all we can to protect it.