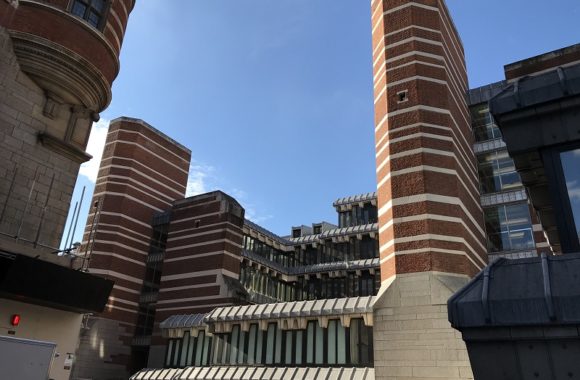 View of Richmond House from Derby Gate: the stone and red-brick banding are picked up from Richard Norman Shaw's New Scotland Yard opposite. 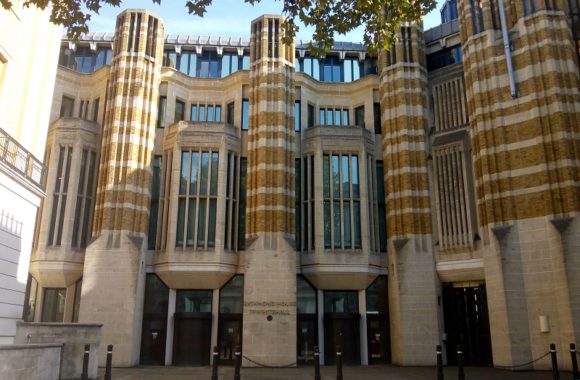 The Entrance Front of Richmond House on Parliament Street.
March 2019

When the Society was launched 40 years ago in the sumptuous Art Deco Ball Room of the Park Lane Hotel, the keynote speech was made by the veteran Parliamentarian Lord St John of Fawsley– then Mrs Thatcher’s Minister for Arts and Libraries. He said with foresight “Good buildings are at their most vulnerable when still young, as taste and technology moves on. They are not old enough to be venerable and the acclamation they received when completed is forgotten”. So it is with Richmond House.

The Joint Committee of the Houses of Parliament decided early last year that Richmond House was the only workable location for the temporary House of Commons chamber while Barry and Pugin’s masterpiece is closed for a seven-year refurbishment. Initially it was thought that the temporary chamber would fit neatly into one of the courtyards at Richmond House. It is sad to relate that the measurements were wrong and those charged with taking the scheme forward decided to demolish Richmond House instead – all of it, except the exceedingly handsome entrance front in Whitehall.

Never mind that it was listed Grade II* just four years ago. Never mind that it was the most expensive public sector office building ever built. It was constructed of the finest materials and designed to be a worthy neighbour of the Foreign Office, HM Treasury and Norman Shaw’s gabled and bartizaned Police Headquarters (aka New Scotland Yard) which it backs onto. It was simply deemed expendable – a curiosity that had outlived its purpose.

Fortunately, its time has come – recently it was selected as one of London’s ten most iconic Postmodern Buildings (Culture Trip, 2017). In this, it shares the lively, colourful company of Piers Gough’s China Wharf, John Outram’s Isle of Dogs Pumping Station, James Stirling’s No 1 Poultry and Terry Farrell’s MI6. 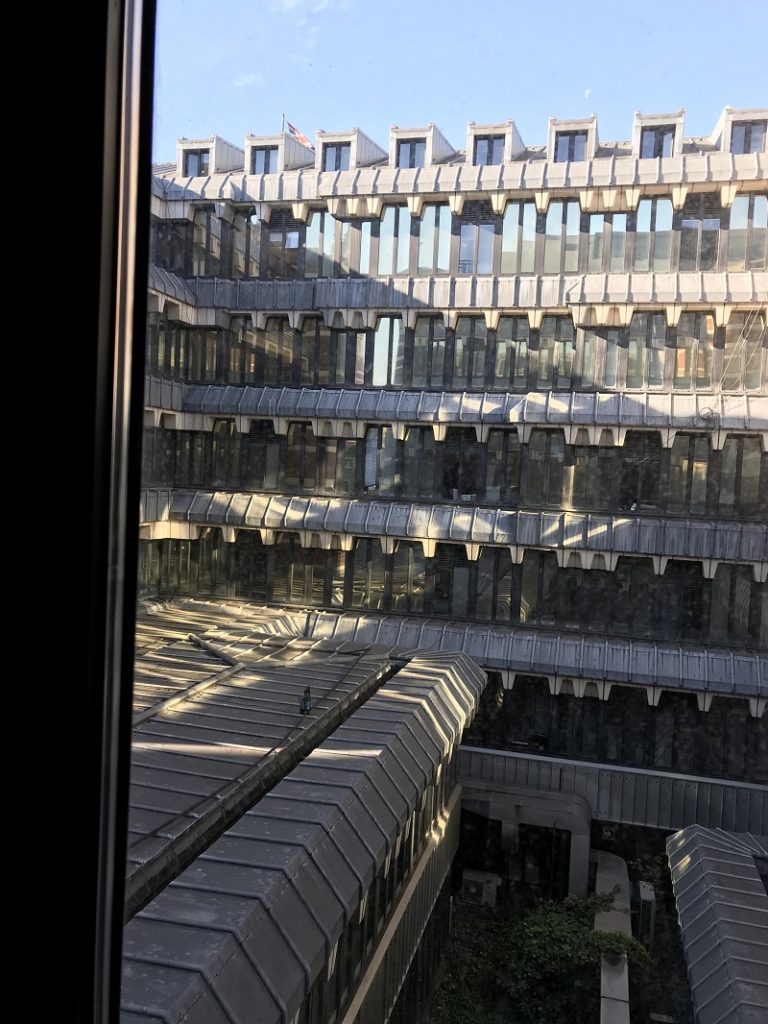 The selection for Culture Trip was inspired by the C20 Society’s Post Modern Buildings in Britain (2017). Both are timely reminders of just how far PoMo had fallen out of fashion by the Millennium and indeed how many of its most spirited designs were derided as Cool Britannia took over and Modernism soared again into ascendancy. The new interest in the best buildings of the late ’80s and early ’90s is a reminder of the heady excitement of the times – akin to Art Nouveau in 1900 – when architects were breaking out of the box. Colour, texture, movement, boldness and experiment were in. New buildings ranged from: Foster, Rogers and Grimshaw’s adventurous High Tech; Michael Hopkin’s expression of structure; and Charles Jencks’ celebration of the sheer plurality of Post Modern architecture including Post Modern Classical and the pure Classicism of John Simpson and Quinlan Terry. Of course, some PoMo buildings were gimmicky and superficial, but the better ones have stood the test of time and are being seen again as buildings of powerful character, imagination and invention.

William Whitfield, the architect of Richmond House, excelled in different modes: he produced a brutalist masterpiece in bush-hammered concrete beside the Institute of Chartered Accountants, he restored the Savoy Theatre to its shimmering silver Deco glory, and he designed the grandest new neo-classical house in England at Tusmore Park in Oxfordshire. He was also chosen as the man to build in the closes of Canterbury, Hereford and St Albans Cathedrals.

Richmond House was completed at the time when the IRA posed a major threat and press coverage was therefore limited. The most comprehensive article appeared was written by C20 Society stalwart Roderick Gradidge for Country Life (1988).  Never a man to withhold criticism, Gradidge rolled out the accolades. Whitfield was described as “one of the most distinguished architects of his generation… There has been no staircase as grand as this in a Whitehall Office since [George Gilbert] Scott built his intentionally overpowering staircase in the Foreign Office… one must go back to the 19th century to find any such imposing government offices.” Is Richmond House, Gradidge concluded, “the beginning of a new architecture?”

Whitfield gave added strength to his courtyard frontages with staircase towers subtly echoing the “streaky bacon” banding used by Norman Shaw. And instead of the usual flat curtain wall of glass for the offices, Whitfield produced a novel version of the ziggurat using lead as well as glass to create strong patterns of light and shade. This is sculptural modelling of a high order, echoing the inspired Whitehall frontage. Whitfield’s building is laid out like a giant capital F. This means that every desk can be near a window with natural light. The ceiling heights are now said to be too low for modern cabling and ducts but with a will these can be accommodated. Whitfield’s layout could also be partitioned to create the panelled offices MPs are familiar with in Portcullis House. Before MPs embark on wrecking Richmond House, they should be clear that they have chosen the most controversial, expensive and time-consuming route to create a temporary Commons Chamber.  A decision to retain Richmond House would restore sanity to this process.

Marcus Binney served as Chairman of SAVE Britain’s Heritage from its formation in 1975 and is now Executive President. He was also one of the founders of the Thirties Society [now C20 Society] in 1979.