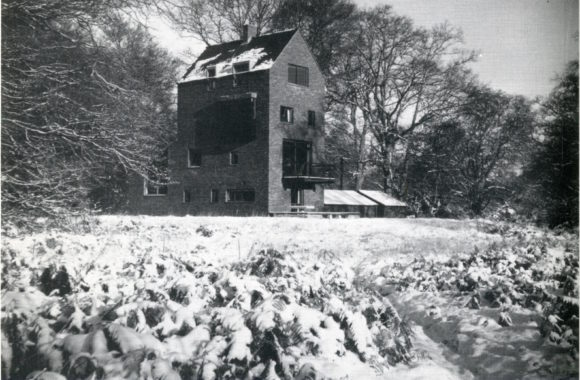 The Tower in snow. Taken from Esher (1985) Our Selves Unknown (London: V. Gollancz). 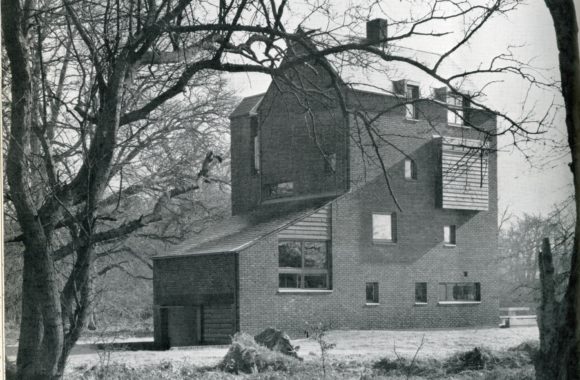 The Tower just after completion (c. 1967), by Eric de Maré from The Architectural Review. 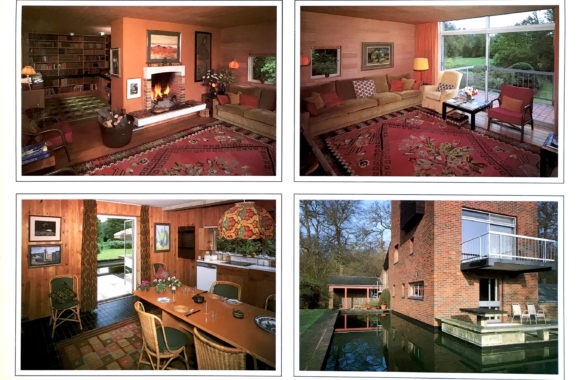 The Tower as the Eshers had it in 1992 (Knight Frank & Rutley International/Hamptons).

The Tower as the Eshers had it in 1992 (Knight Frank & Rutley International/Hamptons). 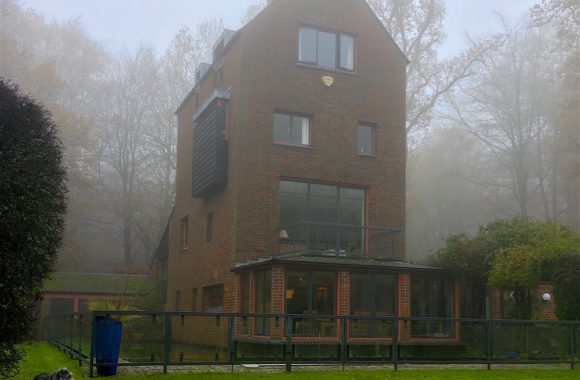 At Christmas Common in the Chilterns sits a lofty house built for a lofty (yet always humble) figure, the architect and planner Lionel Brett, 4th Viscount Esher (1913-2004). James Lees-Milne, the queer architectural historian and diarist, recorded his trip to see Esher in 1986 in the moated, turreted pile he’d built for himself among scrub and oaks — this concerned his life of Esher’s grandfather, Reginald, 2nd Viscount Esher, ‘the Enigmatic Edwardian’, but that’s by the way. Lees-Milne placed the house in its topographical context:

Arrived punctually at one o’clock at the tower… just inside the drive gates to Watlington [Park]. Very nice inside. Outside gloomy and without charm. Not strictly speaking a tower, though built on four [sic] levels. More like a London town house. Gloomy dusky brick and ugly pitched roof. Pretty wooden ceilings exposed, and much wainscot. Picture windows. View from top bedroom… splendid. No garden, some rides cut through the trees. Elms, once thick, now dead and gone. Oaks, both old and seedlings.

Esher had lived in the eighteenth-century manor at Watlington Park where he also ran his practice (then with Francis Pollen) in the cowsheds. To meet the demands of an expanding client base, he moved the outfit to London in 1965 and gave the main house over to his son Christopher. The Tower was designed to be his and his wife’s weekend retreat. It recalls other aristocrats who built modern recluses on their estates — the Eshers’ friends Casson & Conder’s beach house for Lord Montagu of Beaulieu (1957), for example, or Trevor Dannatt’s Pitcorthie (1964-7) for Lord Crawford in Fife. The Tower might have offered Esher refuge from his tenure as RIBA president, from the student revolts he witnessed while Rector of the Royal College of Art, or from the persistent (and painful) jibes about the storm of 1957 which blew off the roofs of some of his Hatfield housing.

Pevsner admired the Tower’s functionality and simplicity, noting its industrial qualities. Headley and Meulenkamp mention it in their gazetteer of follies (‘it is not a folly, but folly-like’, they said) and June Park included it in her survey of the best private homes of the time. So far as the architectural press went, it was described (not unkindly) as ‘a medieval throwback’ by the Architectural Review. As Esher recalled in a 1997 interview with Louise Brodie, ‘it had to be an almost medieval tower, with a moat around it’, on the insistence of his wife Christian, sensitive following a nervous breakdown. She was the ultimate inspiration for its form, as Esher recorded in his memoir:

I had in mind a glass house on pilotis, where we would live a part of nature in our bird-loud glade. C[hristian] would have none of it. She would only live among these towering oaks if I lifted her high into the air. So we built a five-storey tower, a Dark Tower with a moat, so she could sleep at squirrel level — only halfway up the trees, but with prospects between them of the hawthorn jungle foaming out to the horizon.

A tower house is a typology of its own: a combination of a castle and residence in a compact, vertically-organised space. Esher’s has a dense footprint with a resourceful plan over five storeys. It is picturesque in mass and outline, with walls of purple bricks pierced irregularly with variously shaped windows (grey, with red sub-frames) whose deepish reveals cast deep shadows. The house can be seen as part of a mid-late-1960s trend for quasi-vernacular architecture; contemporaneous schemes like Darbourne and Darke’s Lillington Gardens (Pimlico, 1961-71) opted against the more popular Maison Jaoul model of brick walls, flat roofs and exposed concrete frames. The Tower’s principle features comprise: the flat concrete railings that originally defined a dining terrace at ground floor level floating alongside the moat — this was often visited by thirsty deer and heated for swimming; a cantilevered balcony serving the sitting room at first-floor level; a thin weather-boarded oriel window jettying out of the second-floor bedroom; and a pitched roof, with a chimney and two dormers cutting into the roof-line. Under the sloping roof to the rear was a playroom with a sunken garage beneath it. On the eastern side a turret hosts a lift. Internally, natural materials abounded: unpainted plaster walls or Japanese grass paper, blue quarry tiles, hessian, string carpet, Batik blinds designed by Esher’s daughter Olivia Brett (three of these still hang in one bedroom), and a surviving granite hearth slab.

The Tower is organically at one with its landscape. Esher, after all, was a self-defined ‘doctor of the environment’. The southern Oxfordshire landscape in which the house sits was the case study for Landscape in Distress (1965), his polemic on the spread of subtopia, while, among his many committee roles, he chaired the Oxfordshire branch of the Council for the Preservation of Rural England. The landscape is now owned by the National Trust, but the house was sold by the Eshers in 1992. Its new owners built a large single-storey extension at ground level, compromising the tower house concept, and removed some defining features. But the spirit remains largely intact.

Lionel enjoyed painting with Christian in the Tower’s richly-lit top bedroom. In fact, he thought himself a better painter than an architect. I hardly know his paintings, but if the Tower is anything to go by, he must have painted charmingly.

Joshua Mardell, who edits the Building of the Month feature, is an architectural historian who recently finished his Ph.D. at ETH Zurich. He is a teaching associate in history at Queen Mary, University of London.