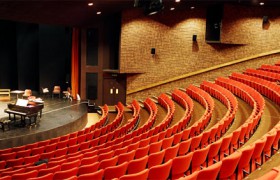 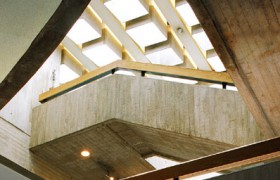 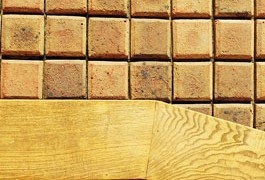 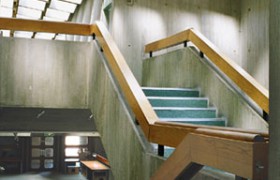 The Thorndike Theatre, Leatherhead
Words and pictures by Barnabas Calder

Hidden behind a Leatherhead street-front of commercial mediocrity is one of the best theatres of the 1960s. It was the product of an ideal pairing of architect and client: an architect fascinated by theatre, Roderick Ham, and an experienced director who knew what her company needed, Hazel Vincent Wallace. The theatre was to provide a restaurant, a bar, a coffee bar and a gallery as well as theatre-club facilities and an auditorium for just over 500 with good stage equipment, dressing rooms and workshops for the use of the repertory company. In order not to sound over-ambitious when fund-raising it was decided to build within the walls of the 1930s cinema that the theatre replaced – a ‘conversion’ sounded less intimidating.

Shops replaced the foyers of the cinema before the theatre was designed, so access from the street is by way of a short corridor. After such a low-key entry the theatre foyers come as a shock: they rise through three stories of wood-shuttered concrete balconies and staircases to a dramatic ceiling of light-boxes, cleverly contoured to exclude direct sunlight whilst allowing plenty of daylight into even the lowest level of foyer. As the architect told me, he regards the way that light enters a building as the key to architecture. With this stress on light and form, Ham created a theatre which has a very strong sense of theatrical occasion without resorting to the modernesque chandeliers and pretty detailing used in some modernist theatres to inject a celebratory note.

A feature of the theatre is that all the foyer areas and the auditorium are accessible to wheelchairs. Standard now, this level of consideration of the disabled was outstanding when it opened in 1969, and won the building a new disability award in 1971.

On the ground floor is the coffee bar, refurbished rather colourfully, but successful in drawing in local residents to enjoy the foyers during the day – a key idea of 1960s theatre planning, and still working well here. There is also a bar and an area used as gallery space, both as designed. The current carpets are a cold light green where initially they were brown, green and black, but some of the original furniture designed by Ham for the foyers can still be seen; like the specially adapted auditorium seats, it was manufactured by Race.

The auditorium reflects widespread trends in modernist theatre architecture. It is a proscenium theatre, but the proscenium arch is made almost invisible by its dark colour, uniting the audience and actor in a single room. As with many 1960s British theatres the seats are all on one steeply raked tier; unusually they are undivided by aisles, keeping the audience as a single unit. Getting this continental layout past English fire regulations took determination. The auditorium is remarkably unaltered, with its original decor and its brick-tile walls with four expressive lighting slits curving out. To give a sense of enclosure, and to avoid the long back rows common to most fan-shaped auditoria, the rear wall is brought round in a wide curve, embracing the audience. Because of its thoughtful design and its relatively small number of seats, the Thorndike is one of the most intimate and architecturally accomplished proscenium theatres of British modernism. It is Ham’s last exercise in orthodox modernist theatre-design; in later theatre schemes he explored multi-tiered auditoria some time before they came back into wider popularity, and demonstrated his interest in local materials.

After many years of success, the theatre underwent subsidy cuts and lost artistic momentum. Closed from 1997-2001, it is now open again as a part-time theatre and a community centre, as well as a religious meeting-place. It is listed Grade II. Although the workshops have been demolished for a health club, and the restaurant has been removed, the Thorndike remains an exceptionally well-preserved and fine example of the best of modernist theatre design.

The foyers and coffee shop are generally open on weekdays, and details of productions, opening and contact information can be found on: www.the-theatre.org