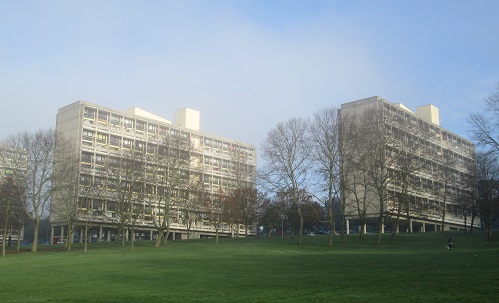 The best low-cost housing in the world

This was how the American critic G E Kidder-Smith described Alton West, the development in Roehampton, SW London on the edge of Richmond Park, designed by the London County Council Architects Department in 1955-59. It has become an enduring exemplar of C20 design, worthy of its fame both in the UK and internationally, its importance recognised by Conservation Area status and the clutch of Grade II* and Grade II listings within in its bounds. Its beauty lies in its fusion of efficient modern housing with pre-existing landscaping to create a scheme of unparalleled sophistication and quality. The project team at the LCC, led by Colin Lucas, all went on to become major forces in private architectural practice.

Despite the plaudits, the estate has, like so many London estates, suffered from a lack of investment over the years. When the London Borough of Wandsworth approached us to discuss their latest master-planning exercise for the estate, our mood was one of cautious optimism. The need for investment is clear, but any scheme to update and refurbish must be based on an in-depth understanding of the estate in its entirety and extreme sensitivity towards its significant elements.

The buildings are, after all, not the only important element in this estate – their setting is critical too: not only how the original Georgian mansions were affected by the insertion of Alton West into their grounds, but also the dynamic created by the post-war listed buildings themselves. The Conservation Area designation recognises this success, and emphasises the need for a holistic approach. Unfortunately the designation has never included the area at the end of Danebury Avenue where it meets Roehampton Lane, which includes Allbrook House, Roehampton Library and blocks of maisonettes and shops, although the Society has for several years made a case for their significance in the masterplan for the estate.

Allbrook House not only acts as a landmark, signalling the gateway to Alton West: it also bookends the estate, matching the slab blocks at the opposite end of Danebury Avenue to define the extent of the development. It forms the centre of a village-like node in the estate with the shops and library creating a community hub at the end of Danebury Avenue. But it is even more than this: it is a transitional building which, with the library and the hard landscaping around it, links Alton West to Alton East, its proportions and design in a direct relationship to the larger slab blocks which frame the far end of the estate, and its smaller scale deliberately chosen to fit with the transition between the three areas of Alton East, Alton West and Roehampton village. Thanks to a larger budget, it also has some added twists – such as brise-soleil – over the basic slab block design, which make its design all the more interesting.

Roehampton Library sits below Allbrook House, with the slab straddling it and marking the divide between the adult and children’s libraries. This was also an integral part of the original masterplan, and designed in conjunction with Wandsworth library services. The design of the roof is a distinctive element, but one underpinned by practical considerations for the library’s internal lighting. Each dome was set with glass lenses (still there, but painted over) which projected daylight onto the bookshelves below. Full-height windows and walls of glass blocks also helped to maximise daylight. A mural by William Mitchell was commissioned for the space. The relatively large children’s library reflects Wandsworth’s library policy at the time, and its opening by the popular children’s writer of the day Noel Streatfeild (author of Ballet Shoes) indicates its importance and explains its architectural treatment.

The master-plan for the estate has gone through a number of changes, leading to the appointment of Studio Egret West last year. It became apparent at an early stage that care had been taken to consider the impact of the proposals on the landscaping and the listed point and slab blocks, and the plans responded reasonably well to these elements. After comments from the Society and Historic England, the original proposal to demolish a row of Grade II-listed retirement bungalows was modified. However, as we feared, the buildings outside the Alton West Conservation Area – and in particular the significance of Allbrook House and Roehampton Library – were not considered with the same sensitivity, and the proposals are for comprehensive redevelopment. Despite our strong objections, at the time of writing Wandsworth are persisting with their plans to demolish these elements of the estate.

Allbrook House and Roehampton Library were an integral part of the Alton West Estate, and they are a critical part of the whole. Their exclusion from the Conservation Area designation has always been illogical; they remain vulnerable and unprotected by heritage designation. We therefore strongly support the proposed listing of these buildings which are currently being assessed by Historic England. We are hopeful for a positive outcome to this process which is expected to be complete later in the autumn.