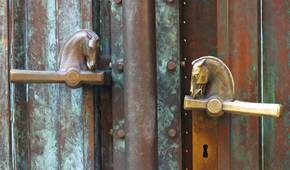 The K6 telephone box was designed in 1935 by Giles Gilbert Scott  to coincide with the Jubilee of King George V, and was initially called the “Jubilee” kiosk.    Between 1936 and 1968 over  70,000 were installed in the UK, and now about 14,000 are left, 2,500 of which are listed grade II , thanks in large part to C20’s  then Chairman Gavin Stamp’s research and campaigning.  Now to mark the Diamond Jubilee and the Olympics, BT are putting replicas customised by artists across London as a pop-up art project and a charity fund-raiser.   Above are some examples of what’s coming.  The top one is wrapped in brightly coloured elastic “to transform it into a tactile, interactive string instrument.”–when you pluck the elastic you hear ring-tones from the K series telephones of 1924 onwards. (I didn’t know they varied!).   –The yellow one is a sort of knitted kiosk-cozy monster and the last one some sort of take on an Elizabethan knot garden.    Will they  be any good?  will the boxes themselves be decent replicas?  who knows, but worth looking out for, and good to see a bit of C20 design getting even more firmly bedded in the popular imagination.  And could this be a long term future for redundant boxes (a sort of mini version of Trafalgar Square’s fourth plinth , all across the country?)

more details and images at http://www.btartboxes.com