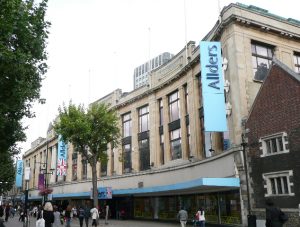 Our Benefactor Member Peter Wilson writes ” The title of the forthcoming C20 Autumn Lecture Series prompts this message of a big store in trouble. Last Saturday, 22 September, was the last day of trading for Allders of Croydon.

Founded 150 years ago in two shops in North End, Croydon, by Joshua Allder, “linen draper and silk mercer”, Allders grew with the town, expanding into neighbouring shops as they became available. Much rebuilding took place in the 1920s and 30s, with the well known North End facade (pictured above) dating from around 1926. The store was badly damaged during WW11 but remained open. Further expansion followed the war, including into the premises of the Scala cinema (opened 1914) which closed suddenly in 1952. By the 1970s Allders was the third largest department store in the UK after Harrods and Selfridges. Following some years of difficult trading, Allders went into administration in June this year. ”