Watch this space for the next stops of this fascinating exhibition on Roman Catholic church architecture in Britain over the period 1955-75. Its journey started at the Lighthouse architecture centre in Glasgow (where it was extended until today, Tuesday 16th October) and has now also reached Birmingham (hosted at St Chad’s Roman Catholic Cathedral, until Monday 5th November). An earlier stop was Liverpool where its venue was most appropriately Frederick Gibberd’s Metropolitan Cathedral, completed in 1967 and one of the most important Roman Catholic church buildings of this period. The rest of its itinerary has not been announced yet, but it is expected that the exhibition will visit many more cities throughout Britain, including Edinburgh, Leeds and London.

The particular focus on the period 1955 to 1975 covers the two decades surrounding the Second Vatican Council, which began 50 years ago this year. For those lucky enough to have a copy of the Society’s Journal on the ‘The Twentieth Century Church’ (issue no.3, published in 1998; now out of print), this exhibition will come largely as an ‘update’ on Elain Harwood’s article ‘Liturgy and Architecture: The Development of the Centralised Eucharistic Space’.

‘Churches in the Modern World’ is a small part only of a substantial research project based at the Glasgow School of Art and funded by the Arts and Humanities Research Council (AHRC). A number of talks and articles by its principal investigator, Dr Robert Proctor, are to be followed by a comprehensive publication in 2014. 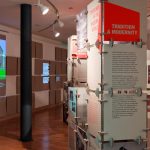 The current exhibition is organised around three themes: Tradition and Modernity; Devotion and Liturgy; Church and City. Meticulously selected case studies demonstrate the changing approaches to church architecture under each of these headings and successfully represent the geographical area covered by the research project and also the great variety in stylistic approach, in scale and in the involvement of architectural practices of regional or national importance. In addition to its commendable contents, the material and design of the exhibition by Collective Architecture are also to be applauded.

‘Churches in the Modern World’ is free for all visitors. Further information about the project, including exhibition venues and publications, is available on the project blog.