The University of Sheffield have made available on Flickr a collection of historic photographs and plans from the archive of influential planner J R ‘Jimmy’ James. The archive includes images of many C20 architectural landmarks, from new towns like Harlow, Stevenage, and Cumbernauld to the radical housing development of Park Hill in Sheffield, city centre schemes such as the Bull Ring in Birmingham, and new universities in Sussex and York. They are interspersed with fascinating snapshots of post-war British life: boating on an unnamed pond, sports day in Cumbernauld, a Harlow disco, shopping in Sheffield. 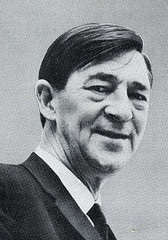 J R James was influential in post-war planning, working on the new towns of Newton Aycliffe and Peterlee and becoming chief planner at the Ministry of Housing and Local Government from 1961-1967. He later became a professor at the University of Sheffield, and left nearly 4,000 slides, many of which were used in his lectures. Visualisations and plans for new towns or estates and photographs of the buildings in progress give a fascinating insight into developments that have shaped the C20 urban landscape. The project, which has been funded by the University of Sheffield Alumni Fund, is a treasure trove for anyone interested in C20 architecture and planning. J R James Archive