All who take the celebrated ferry across the Mersey will be struck with the beauty of Liverpool from the water. The famous early twentieth-century buildings from the time of its peak prosperity as a transatlantic port are now flanked by increasing quantities of developerishly-aspirational flats of considerable height and varying claddings. In a waterfront on which so much jostles to be noticed, the tunnel vents of the 1930s Queensway Tunnel are inconspicuous – much more visible on the Wirral side of the water as a great dark-brick Art Deco monument, Birkenhead’s answer to Battersea Power Station.

Still holding its own, however, a little further up the Liverpool waterfront, is the vent of the 1970s Kingsway Tunnel, an exposed concrete chimney above two large air intake ducts. Designed by people cloaked in the anonymity of the engineering practice who undertook the tunnel, this vent and its near-identical sibling on the Wirral have none of the symbolic statuary, stone cladding or stripped-classical ornament of the Queensway vents. The older tunnel’s above-ground elements were published with the name of the architect who decorated them (Liverpool’s excellent Herbert James Rowse) considerably more prominent than that of the tunnel’s engineer, Basil Mott. 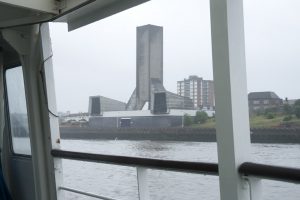 The Kingsway vents are superficially utilitarian in the clarity of their parts – the air intakes look like intakes, and the chimney looks like a chimney. As so often with the concrete architecture of the 1960s and ’70s, however, this apparently inarticulate simplicity only thinly cloaks a considerable artistic forcefulness. For a start there is an exaggerated quality to the clarity of these vents. The paired vents and bifurcating chimney flues, for example, advertise the presence below of two parallel tunnels. More, the forms themselves are heightened: the chimney swelling cartoonishly as it rises, stiffened by space-rocket-like fins and flanked by the faintly biomorphic air intakes, make these tunnel vents amongst the most immediately recognisable monuments of Liverpool, a city with no shortage of recognisable monuments. The shapes of the vents speak so persuasively of technology, of a particular vision of progress and the future, that they have frequently been compared either to space craft or to a high-design 1960s sound system.

The Liverpool-side vent is perhaps the more beautiful of the two, with its round-section pipes into the chimney echoing more closely the oil rigs and space stations so admired by the High Tech architectural visionaries of the 1960s. However, an in-situ concrete cylinder at an angle is not easy to cast, and the price paid for its form is that the gunite (sprayed concrete) from which it was made was always less well-finished than the less ambitious square-section pipes of the Wallesey vent.

The final characteristically post-war attribute of the Kingsway Tunnel is the overall similarity between the vents on the two sides of the river. The Queensway tunnel vents are faced by default in brown brick, but in stone in two cases ‘in consideration of the amenities of the important business districts in which they stand.’ The highly visible contrast of dark brick and Portland stone highlights the relative wealth and power of Liverpool over Birkenhead, views of which are dominated by the brick-clad vents. The conspicuous egalitarianism of the post-war tunnel superstructures makes for an attractive contrast to this, treating each location to an equal and almost identical display of sci-fi expressionism.

Along with the cathedrals, the tunnel vents made a worthy subject for crockery by People Will Always Need Plates, celebrating Liverpool’s status as European Capital of Culture. Sadly it appears to have sold out.

From November, Barnabas Calder is Lecturer in Architecture at the University of Liverpool. His research specialises in British architecture since 1950, and he is currently working on a book on Brutalism, and a major new web resource on Denys Lasdun with the RIBA. Follow him on Twitter at @BrutalConcrete.