This year marks the 70th birthday of the Aldeburgh Festival, founded in 1948 by Benjamin Britten, then a relatively low-key regional event, now a major feature of the international musical calendar.  The principal base of the Festival in its early years was the 1880s Jubilee Hall in Aldeburgh, built at the expense of local industrialist Newson Garrett, developer of the complex of maltings at nearby Snape. In 1965 Britten launched a project to convert part of the now redundant maltings to house a state of the art concert hall, “with certain facilities for opera”.

Ove Arup had been a regular visitor to the Festival since its early years and Britten turned to him for advice on the practicalities of the project. Two years earlier, Arup had launched Arup Associates as a multi-disciplinary practice with Bob Hobbs, Philip Dowson and Derek Sugden as founding partners. Sugden (1924-2015) was despatched to Suffolk to meet, firstly, the inspirational Festival director Stephen Reiss and, soon after, Britten and his partner Peter Pears. A cordial working relationship soon developed: music had been Sugden’s passion since he attended Proms in the Queen’s Hall as a teenager. Britten was a demanding client: he wanted a 1000 seat hall, costing no more than £50,000, and completed in time for the 1966 Festival. The concert hall eventually cost £127,000, seated 830, and was opened for the Festival in 1967. 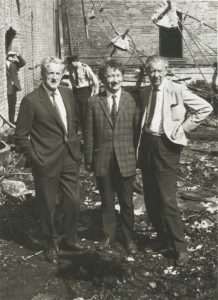 Like Sugden, who later became Britain’s most eminent acoustician, and many other musicians, Britten disliked the dry acoustic of the Festival Hall. He greatly preferred that of the Suffolk churches in which some Festival concerts took place, notably Orford and Blythburgh. Converting the New House, a vast space at the centre of the maltings complex filled with four huge drying kilns and sub-divided by internal brick walls, was no easy undertaking. “The roof design was the key to the whole building”, Sugden later wrote. Of untreated timber, and retaining the basic shape of the old roof (along with the rooftop smoke hoods), it combined with the brick walls to create an interior where the industrial aesthetic is equally part of the acoustic strategy. Sugden achieved the warm, reverberant acoustic that Britten sought, arguing that it was “dangerous to talk about acoustics in an abstract way, to divorce them from their physical surroundings, because the whole architecture of the space in which music is made is as much responsible for our whole response to the music”.

On 7th June, 1969, following the opening concert of the Festival, the Maltings was gutted by fire. Sugden, devastated by the news, rushed to Suffolk. Britten had already come to terms with the loss of the hall. A production of Mozart’s Idomeneo opened on schedule, transferred to Blythburgh church. Britten wanted the hall rebuilt, “just as it was”, and opened in time for the 1970 Festival. In 42 weeks the Maltings was rebuilt under Sugden’s direction and with a workforce led by the Blythburgh carpenter Bill Muttitt, “an exceptional man” in Ove Arup’s opinion. The acoustic, Sugden commented, was even better than it had been. The Queen came to open the Hall, as she had done in 1967, commenting that she hoped not to be asked to come back a third time.

Nearly half a century on, Snape Maltings remains one of this country’s best loved musical venues. In 1980, while remaining a partner in Arup Associates, Derek Sugden launched Arup Acoustics – Michael Hopkins’ Glyndebourne opera house is one of the major projects on which he worked. Though involved in many of Arup Associates’ projects up to the time of his retirement in 1990, Snape remained the project of which he was most proud. The hall itself, completed with timber seating inspired by that at the Festspielhaus in Bayreuth, made in Ipswich, and designed to make people “sit properly” in Imogen Holst’s words, remains as reinstated in 1970, though there have been minor alterations to the foyer spaces. A new top floor restaurant designed by Penoyre & Prasad was added to the subsidiary block east of the hall in 1999, while more recent additions at Snape, including the 350 seat Britten Studio, have been done by Haworth Tompkins.

Visiting Snape is never less than memorable: the setting amongst the reed beds under the big sky is stunning. But at the heart of the place is the hall, a brilliant re-imagining of a historic building that makes every performance there, whether of Bach, Britten or Bernstein, something not to be forgotten.