Erling Viksjø’s government buildings in Oslo, The Highrise (1958) and The Y-block (1969), constitute a unique architectural whole, and are key works of Norwegian modernist architecture. Both are decorated with integral art made by Pablo Picasso. Following a political decision in May 2014, The Y-block is now threatened by demolition, despite pleas from experts within the heritage field. The Y-block is a monument of European importance and must be saved.

As late as June 2011 both The Highrise and The Y-block were scheduled to be listed for the highest level of heritage protection. This process was stopped as a result of the terrorist attacks on the 22th July 2011. On that day a right-wing extremist placed a bomb in the government quarter. The explosion caused heavy damage in the surrounding area, killed eight people and injured many more. In the chaos that ensued, the terrorist drove to Utøya Island, where he attacked the Labour Party’s youth camp. On the island he shot and killed 69 people, most of them teenagers. The terrorist later proclaimed that his aim was to destroy the democratic system.

Despite the bomb, both The Y-block and The Highrise remained structurally sound, with Picasso’s art works intact. However, rather than rejoicing at the degree of preservation, several politicians wanted to demolish the buildings. In May 2014, the cabinet announced that The Highrise would be restored, whereas The Y-block would be demolished. The demolition has since become a criterion for the further development of the government quarter.

The artistic value of Viksjø’s two government buildings is immeasurable, especially because of Picasso’s five murals, two of which belong to The Y-block. “The Fishermen” is on the façade, facing the busy street Akersgata, and “The Seagull” is in the lobby. The buildings are also pioneering works when it comes to the use of concrete.

In 1955, after several years of experimentation, Viksjø and the engineer Sverre Jystad patented “naturbetong”, a type of concrete with embedded river gravel. The surface is sandblasted to reveal the stones, and can also create decorative patterns. The artist Carl Nesjar worked with Viksjø to develop this as a new method of making integral art. The decorations are not added onto the building, but rather engraved into its very structure. 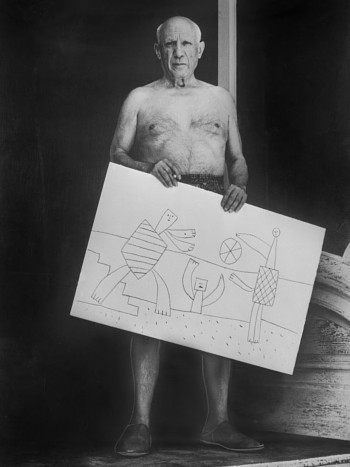 Pablo Picasso with “The Beach”, a mural in the Highrise. Photo © Carl Nesjar

The possibilities of this new concrete technique were a vital reason for Picasso’s participation in the project, and all his sketches were done pro bono. Carl Nesjar first visited Picasso in France in 1957, and showed him photos of his and Viksjø’s experiments with concrete. Picasso was jumping with excitement for this new material.

The meeting was the beginning of a 17 years long collaboration between Nesjar and Picasso. Up until Picasso passed away, the two artists created 34 works together. Most of these were freestanding concrete sculptures, some of which can be found in New York, Paris, Stockholm and Jerusalem. But apart from the government buildings in Oslo, they only made murals in two other locations: the COAC-building in Barcelona and a private chateau in France. Only the COAC mural and “The Fishermen” on The Y-block are available to the public. Picasso is said to have been very pleased with the position of “The Fishermen”, and to remove it from its intended location would be detrimental to the artistic integrity of the work.

The Highrise and The Y-block constitute a unified whole, where the buildings mutually enhance each other, and create an interesting space between them. Both exteriors and interiors have walls made from sandblasted concrete with river gravel, a poetic local variation of the brutalist architecture of the time. The Y-block’s iconic shape, combined with the pioneering use of concrete and Picasso’s art, make it a building of exceptional value.

Viksjø’s concept of a high-rise combined with a low volume was developed over many years, and he conceived The Y-block’s curved shape in the late fifties. Viksjø was inspired by several of Le Corbusier’s buildings. The combination of a highrise and a lower volume is also reminiscent of the UN-building in New York (1952), designed by Oscar Niemeyer, Le Corbusier, Wallace Harrison and others. In addition, the shape of The Y-block has similarities to UNESCO’s headquarters in Paris (1958), made by the architects Marcel Breuer, Pier Luigi Nervi and Bernard Zehrfuss.

After the terrorist attack in 2011, the buildings have become important symbols of the perseverance of democratic values, even in the face of inconceivable atrocities and human loss. The buildings also play an essential part in preserving the government quarter as a memorial, carrying witness to what happened there.

The political arguments in favor of demolition have varied, from economy, to cityscape, environmental issues and security. None of them hold much weight, once scrutinized. The security concerns arise from a road passing underneath the northern wing of the building. However, it is already clear that this road will be lowered into a tunnel, and it would thus be easy to make the necessary adjustments.

The decision to demolish The Y-block has been met with massive protests from heritage organizations, architects, city planners, art historians and other professionals within the field. Both The Norwegian UNESCO Commission, ICOMOS and Europa Nostra have implored the responsible minister to rethink the cabinet’s decision. The Y-block must be saved, and the fight will continue!

Fortidsminneforeningen
The Society for the Preservation of Norwegian Ancient Monuments