Over the past three months C20 NW have collaborated with the Modernist Society on organising a series of events to celebrate the centenary of Mitzi Cunliffe, ‘Sculptor for Architecture’ and designer of the iconic BAFTA trophy mask. Over the weekend of the 2018 BAFTA Film Awards we launched an appeal on Crowdfunder, with the following objectives:
• To install a civic plaque on the artist’s former house and studio in Manchester.
• To present a lecture on the artist.
• To create a printed and online sculpture trail of her work in the Manchester area, accompanied by a coach tour of the sites. 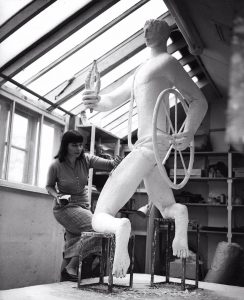 We exceeded our target by a significant sum and will now install the plaque at a special ‘unveiling’ event on 30 June, then hold the lecture in the afternoon at the Whitworth Gallery, given by Professor Ann Sumner. This will be followed by a conversation with Antonia Cunliffe Davis, the artist’s daughter, who will give her perspective on her mother’s achievements as a sculptor. The talk at the Whitworth is open to all and free; booking preferred but not essential: http://modernist-society.org/events/2018/6/30/mitzi-cunliffe-talk

We turned to crowd funding because although Manchester City Council welcomed the idea of installing the plaque (it will be the city’s first dedicated to a woman artist), they expected it to be self-funded and it was apparent that no grants were available from other sources. Crowd funding has certainly worked for us, probably because we were able to take advantage of both local and international support (she was American) and although she is not particularly well-known, the trophy certainly is. We have also had considerable help from Ms Cunliffe Davis throughout the project, as well as the support of the family who purchased the house from Mitzi Cunliffe and her husband in 1964. We were able to pool organisational expertise with the Modernists, with whom we have had a longstanding and friendly relationship. We very much hope that this venture will give proper recognition to a culturally important but neglected sculptor and designer, who made much of her work in Manchester and also give impetus to further research on her.