You might not notice the Old Gym building, nestled into a sloping site by the grand red-brick late Victorian Aston Webb buildings on the University of Birmingham’s Edgbaston campus. At first glance, this three-storey brick building next to the ring road is an unremarkable 1940s administrative block with steel windows. The visible drainpipes suggest that this façade was never meant to be glamorous.

However, pop your head around behind the building to look at the gym hall, and it gets more interesting: the striking quality and rich detail is immediately clear, and you realise that this is the principal facade. The double height nature of the hall space and viewing gallery behind is expressed externally by seven original tall Crittall windows set in projecting brick surrounds, truncated as a giant order with slender entablements. These windows were designed to open out onto a lawn and a landscaped setting, still in place, which slopes gently westwards. 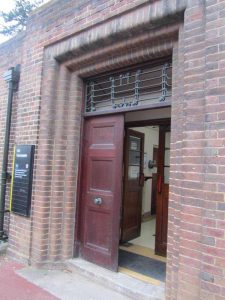 Look again at the front of the building and you notice the considered and well-executed brickwork, including the use of a continuous header course every fifth course. The timber double entrance doors have ornate grill fanlights in carefully detailed receding brickwork door frames. Inside, the men’s and women’s changing rooms are little changed, with the original sky lights, glazed brickwork, terrazzo flooring and even the shower cubicles unaltered. The gym hall retains the high-level viewing gallery and the stairs – with Art Deco banisters – remain intact.

The Old Gym is interesting not just for its architecture. Its construction in 1939-41 followed the Physical Training Act of 1937, promoted by the prime minister Neville Chamberlain as part of a drive to improve public health by integrating physical education into daily life. It was built under the supervision of Albert Davis Munrow, who was appointed Director of Physical Education by the university in 1939 and remained in post until he retired in 1970. This full time position was established to make physical education and instruction an integral part of the university curriculum; in the same year, physical education was made compulsory for all first year students.

The building was funded from grants from the University Grants Committee and the National Committee for Physical Fitness. It is not clear if the gym was the first of its kind in the country, as other provincial universities were putting together physical education schemes around this time, but it was certainly one of the first, and of added interest due to its construction in wartime when building materials were scarce. It was designed by Birmingham-based architects Peacock and Bewlay, who were responsible for a number of significant buildings in the city, including the Juvenile and Coroner’s Courts (1937) on Newton Street. They also designed 11 and 12 Bennetts Hill (1930-33, Grade ll), the Birmingham College of Law Building on Great Hampton Street (1936), and the Mechanical and Electrical Engineering Department building for the University (1951, 1954 and 1957).

That the building remains in use partly as a gym is testament to its success,  and it is also used for examinations and fitness classes, with offices on the first and second floors. It was scheduled for demolition as part of major works proposed by the University, which include a new sports centre and library building and re-landscaping. We are delighted that following representations by the Society the plans have been revised, and the Old Gym is to live on.