The Grand Hotel on the Isle of Wight was saved from demolition yesterday when the Council’s planning committee voted to reject proposals to flatten the building.

Built in 1938, the hotel in Sandown on the south east coast of the island was shut in 2012 and had been threatened with redevelopment plans.

The Twentieth Century Society teamed up with a local campaign group (Save The Grand Hotel Sandown) to object to the demolition of the art deco building which has some historic interior features – like mahogany panelling in the dining room – reputed to have come from the famous ocean liner the Aquitania, and ballroom with a sprung dancefloor and fine 1930s detailing.

The decision to save the building gives the owner the opportunity to think afresh about ways to refurbish this once beautiful landmark hotel, and to capitalise on the current resurgence of interest in art deco architecture.

Although in need of refurbishment, it was open until last year and this brochure from 1938 when the hotel opened – sent in to us by one of members – gives a glimpse of how it could be returned to its former elegance and glory. 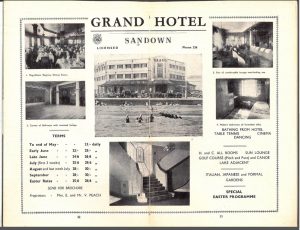 Not only does the Grand have interesting architectural features, it was also associated with the World War II Operation Pluto (1943-4), a British mission to supply fuel via undersea pipelines to the Allied Forces in France after the D-Day landings. The basement of the hotel (now sealed shut) was used as a control centre for the highly secretive Pluto project.

There are only two other hotels from this interwar period left on the Isle of Wight: The Shanklin Hotel, in Shanklin and the Royal York Hotel, Ryde (1937-8). The Royal York is grade II listed but also shut and in poor condition.