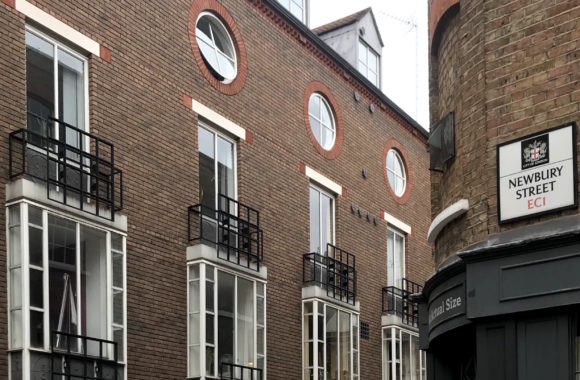 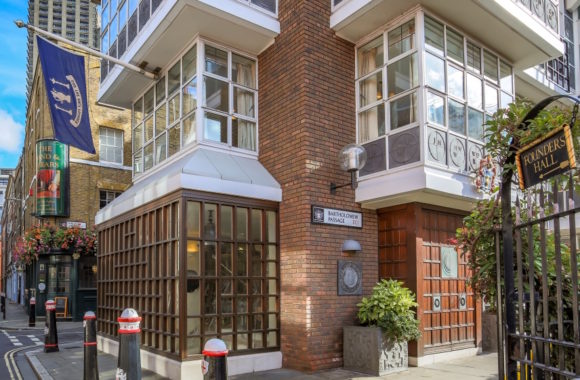 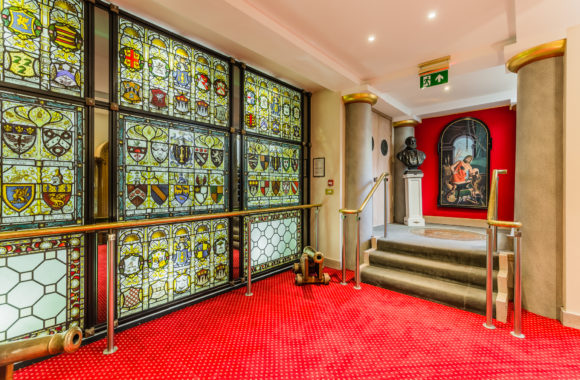 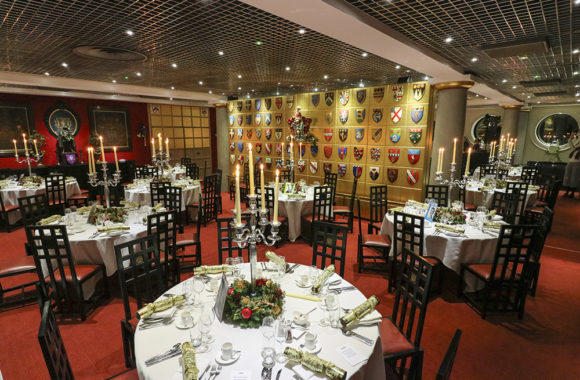 The livery company halls that lie within the City of London comprise a remarkable collection of buildings, less well known than perhaps they should be. Their origins date back to the medieval guilds, whose function it was to set and control standards within a variety of trades and professions. While half of the forty halls standing today remain on their medieval sites, all have been rebuilt, some several times. A few still contain ancient fabric but a very large number were destroyed during the Blitz. Several of the post-war reconstructions are of architectural note and worth seeking out — the Founders’ Hall by Jeremy Sampson (Sam) Lloyd, designed 1984-1990, certainly is.

The Worshipful Company of Founders were first recorded in 1365, as casters of metal, principally brass and alloys, and they stand at No. 33 in the order of precedence of Livery companies (settled by the City Aldermen in 1515). From 1877 the Founders had premises in St Swithin’s Lane where their hall occupied the third floor of an outwardly orthodox commercial building. It was not badly damaged in the war but lack of space compelled the company to move to new purpose-built accommodation in the 1980s.

Their new (and existing) site was long and narrow, fronting Cloth Fair, Kinghorn Street and Bartholomew Close, on the northern edge of the City, close to Smithfield Market. The appointed architect, Sam Lloyd (1930-2009) of Green Lloyd architects came from a practice founded two generations earlier by his maternal grandfather, William Curtis Green (1875-1960), architect of the Dorchester Hotel (with Owen Williams) and the Wolseley restaurant in Piccadilly. Lloyd took his cue from nearby Nos. 41-42 Cloth Fair, a remarkable pre-Great Fire survivor, which had been restored by Seeley & Paget for their office and home in 1930. Its jetties and gables were the inspiration for Lloyd’s exuberant design. While yellow and brown stock brick is the main facing material for the five-storey reinforced-concrete frame, it is the projecting bays that catch the eye, alternately proud and recessed. The main entrance façade faces west onto the narrow Bartholomew Passage fronting the eastern end of St Bartholomew-the-Great, providing a striking juxtaposition of architectural styles. A palette of decorative materials is used including cast aluminium plaques (containing the initials of Court and Livery Members at the time of the Hall’s construction), terracotta panels and metal grilles.

Both of the main function rooms, the ground floor Parlour and the lower ground floor livery hall look out onto the gardens of the adjacent churchyard, the latter through high-level port-hole windows. The square-framed window divisions in the entrance lobby and bays suggest an Arts and Crafts influence, reflected too in the Charles Rennie Mackintosh-style furniture, which also sit comfortably with some of the panelling and fixtures relocated from the St Swithin’s Lane premises.

Two of the main functions of the Company are the certification of weights and measures, and secondly the casting of bells, and there are physical manifestations of both inside the entrance hall and stairway. The finer skills of metalwork are also displayed, including candlesticks and pewter. The prize exhibits are the exquisite maquettes by Charles Sargeant Jagger (1885-1934) of two of his most famous sculptures, the Royal Artillery Memorial (1925) at Hyde Park Corner, and the Great Western Railway War Memorial in Paddington Station, the latter depicting a soldier reading a letter from home. There is also a bronze statuette by Jagger of Edward, Prince of Wales, playing tennis.

The architectural merits of the new Founders’ Hall were quickly recognised. The Building of England; London 1: The City of London noted in 1997 that “the new hall shows the cautious Neo-Vernacular contextualism of the 1970s moving towards Postmodern playfulness and colour”. Roderick Gradidge, a champion of traditional architecture, described it as “lively yet courteous street architecture”. In its wake Sam Lloyd was commissioned to convert the north-west wing of Somerset House for the Courtauld Institute of Art (1989) and to design Pellipar House in Cloak Lane for the Skinners’ Company in 1991, an equally witty and well-crafted gem.

Founders’ Hall was added to the statutory list at Grade II, in May 2018, as part of Historic England’s review of the best of Postmodernism. Its architectural interest is summarised “as a distinctive and nuanced late-C20 reinterpretation of a livery hall, its architectural design fusing neo-Vernacular historicism, Arts and Crafts influences with Post-Modern wit and extravagance, for its quality of craftsmanship and construction, detailed with rigour and consistency.”

Written by Alec Forshaw, author of New City: Contemporary Architecture in the city of London (2013) and Smithfield Past and Present (1990). The Building of the Month feature is edited by Joshua Mardell.