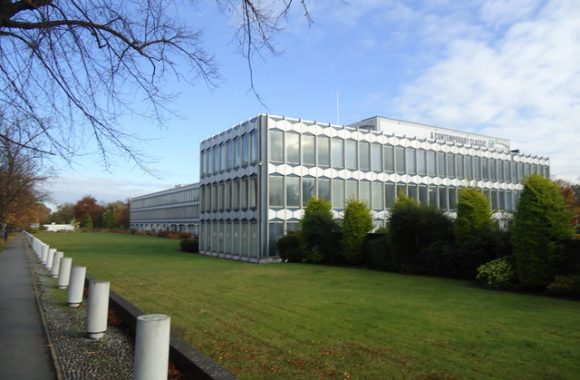 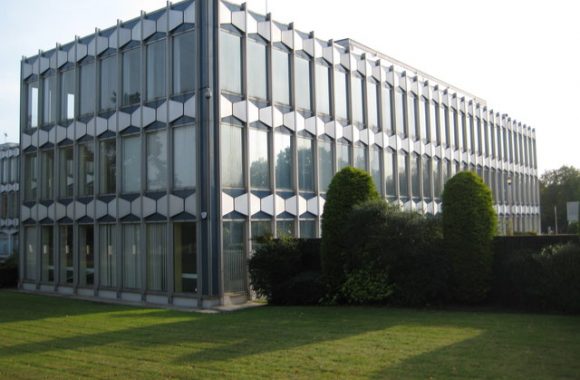 The intellectual HQ of fish fingers, Walton Court in Walton on Thames, Surrey, is under serious threat from a current application for total demolition. Designed by the highly influential and long standing British practice Sir John Burnet, Tait and Partners for the frozen food giants Birds Eye, it was completed in 1961 and listed at Grade II in 1995.

A combination of burgeoning car ownership and government policy in the early 1960s encouraged the relocation of office buildings away from business centres in London to more remote sites across the South East. Walton-upon-Thames presented an ideal and accessible location next to the train station for employees without cars. Birds Eye were without doubt keen to take advantage of the lower building costs, but a major factor behind the relocation was the opportunity it also provided for the creation of a new, cutting edge corporate identity which could be achieved in part through the construction of a state of the art headquarters.

Sir John Burnet, Tait and Partners designed a bespoke commercial building of three storeys arranged around two internal courtyards. Most striking are the facades, made up of plate glass curtain walling, blue vitreous enamelled panels and repeating half-hexagonal aluminium sections attached to thin aluminium mullions. The result is what historian Elain Harwood describes as ‘an early example of 1960s op-art’ in architectural form. This was a clear expression of optimism in technology, something that was central to the Birds Eye frozen food brand.

Walton Court does not stand as a statement building apart from its surroundings; rather it was one element of a holistic design approach which sought to integrate architecture and setting as a way to increase the perceptual experience of the whole. Landscaping was overseen by Philip Hicks who set the main building elevation back across a lawn and behind a long rectangular pool which runs its length. The pool reflects the geometric shapes that rise above it, and the curtain walling reflects the water below. It is this contrast between the bold and experimental on one hand, and the elegant and tranquil on the other that makes Walton Court so striking. Hicks also oversaw the landscaping of the two internal courtyards, one of which contains concrete menhirs by the artist Alan Collins which are arranged around rectangular pools. A standalone of sculpture depicting rising birds by the artist John McCarthy stands next to the pool at the sites entrance and is listed independently at Grade II.

There are number of quirks which contribute to the overall interest of the building, one of the more bizarre being the population of the two internal courtyards with a menagerie of animals including flamingos, penguins and alligators – presumably to entertain the staff and to impress visitors. These were eventually given a new home in London Zoo. Perhaps not unexpectedly, Walton Court was also one of the earliest canteens in the country to serve pre-packaged frozen meals.

The building has been empty for around ten years, and the site has recently been purchased by Crest Nicholson who are seeking planning permission to redevelop the site for housing. They claim that residential conversion would be financially unviable, and we are deeply concerned that there is a real chance this fantastic building will be lost forever.