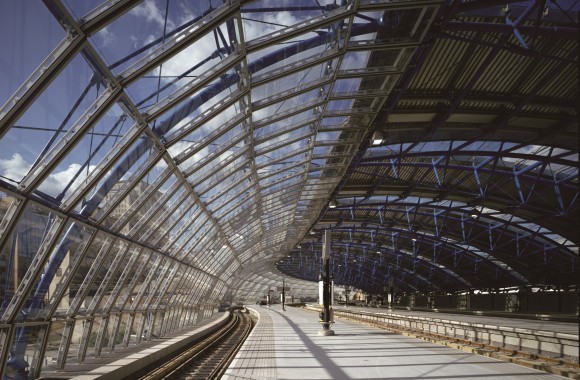 The Waterloo International Terminal is under severe threat from  imminent redevelopment plans, and the Twentieth Century Society is calling for urgent spot-listing at Grade II*.

Designed by Grimshaw and Partners, it was one of the highest profile buildings in the world at the time of its completion in 1993, winning a number of prestigious awards including the RIBA President’s Building of the Year (to become the Stirling Prize a year later) and the Mies van der Rohe Award for European Architecture.

The building is best known for its roof, a superstructure of glass and steel held together by 299,000 individual components. Its luminous skin undulates gently as it curves and tapers along the tracks. Expansive glazing gives the arriving and departing trains impressive views out across Westminster, and the whole concourse a remarkable quality of light throughout the day.

Despite the iconic status of the shed, the Twentieth Century Society strongly considers that the significance of the terminal lies in its entirety. Less visible to passers-by, but just as impressive, is the vast concrete substructure underneath, which contains dedicated arrival and departure levels and a car-park. It is a high-tech Gesamtkunstwerk, where almost every detail of the interior was architect designed right down to handrails, uplighters and bathroom sinks.

Waterloo is a definitive work in the oeuvre of Sir Nicholas Grimshaw CBE and a key example of British high-tech design, but in addition to its architectural quality, the building is of unique importance for its unprecedented historic role in international rail travel.

As part of the Waterloo station upgrade, Network Rail will extensively remodel the lower levels of Waterloo International, stripping out the original bespoke features, and inserting a new roof which will span the gap between the Grimshaw extension and the Victorian concourse.

Tess Pinto, Twentieth Century Society Conservation Adviser said ‘We recognise that alterations will need to be made in order to bring the terminal back into use. However, these should be conservation led, as with the highly successful St Pancras restoration, where works were robustly justified and undertaken with close attention to everything that makes the original building special. We are calling for Grade II* listing so that the alterations will take into account the undoubted significance of this world-class building.’

Sir Nicholas Grimshaw CBE is considered one of the most important contemporary British architects and a pioneer of high-tech architecture. His Financial Times Printworks and Western Morning News Building have both been recently listed at Grade II*. Other notable buildings include his early work with Terry Farrell at the Herman Miller Factory in Bath (Grade II), and the Eden Project in Cornwall. In 2004, he was elected as president of the Royal Academy of Arts.