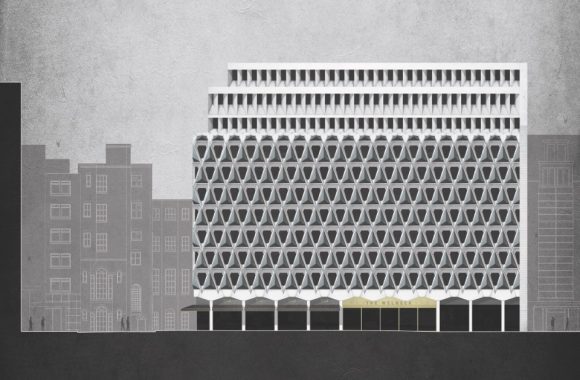 The campaign to save the magnificent Brutalist car park close to London’s Oxford Street is gathering momentum with architects JAA developing alternative plans for a hotel which would allow the retention of the elaborate 1970s façade of prefabricated concrete diamonds.

“This building immediately stops you in your tracks and lifts the spirits. If not the earliest example of a ‘Pop Art inspired’ facade, it is certainly a rare architectural find in 2017, being one of the few examples to survive in London,” said Jenny Fleming, Director of the London architecture practice JAA.

The resultant scheme found that, by forming a extra high space half way up the existing facade, and then setting-out the floors from this point both upwards and downwards, that the hotel use could be inserted behind the existing facade. The extra high 4th floor has therefore been proposed as an impressive restaurant/ bar space.

In order to make the scheme more comparable with the commercial ambitions of the approved scheme, JAA have added three new floors to the top of the building, setting them back from the existing facade so as not to undermine the grandeur of the original facade, and borrowing from its rhythm with regards to window apertures and materiality.

The subdivision behind the facade has been dealt with by infilling the lower triangles, between the diamond frames, with a dark metal facetted panel. It is the infilling of this area that allows the positioning of new dividing walls as well as any new air inlet/outlet for the bedrooms. The remaining larger openings would be glazed to allow an interesting framed view out to the surrounding city.

JAA’s plans include 187 bedrooms, just 20 short of that proposed by architects Eric Parry Architects for the developers Shiva Hotels.

The Twentieth Century Society which campaigned but failed to get the building listed, has welcomed JAA’s involvement.  Director Catherine Croft said: “We have to get away from this short termism of ‘out with the old and in with the new’ and come up with more imaginative solutions which will allow us to adapt and retain these important buildings. They are a valuable legacy which add to the richness of the fabric of our architectural heritage and the best examples should be safeguarded for future generations.”

An on-line petition to save the car park (www.change.org/p/sadiq-khan-save-welbeck-street-car-park-from-demolition), which was designed by Michael Blampied and Partners in 1971 for the department store Debenhams, currently has more than 2,250 signatures.

Jenny concluded:  “There is a certain ‘quirk’ of staying in an old car park, which could have mass appeal beyond Peckham or Shoreditch; as with all things, it just needs to be marketed in the right way. An old car park? Perhaps. Or, an old carpark with interiors of Don Draper’s apartment in Mad Men, a bar from a Connery-era Bond, and a concrete facade befitting an LA-cool episode of Columbo from 1971? Old hat to some, perhaps, but the epitome of chic to others.”

Now the campaigners are hoping to convince Westminster Council and Shiva Hotels of this before the bulldozers move in.