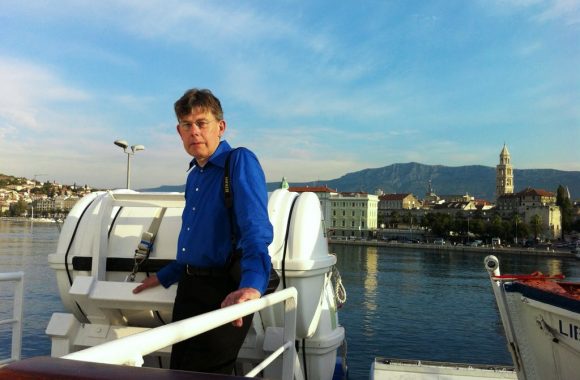 We are very sad to report the death of Gavin Stamp on December 30th 2017.

Gavin Stamp played a pivotal role in C20 Society, from its earliest days. He was a founder member of the Thirties Society in 1979, and a very active Chairman for over twenty years, from 1983-2007. He continued to be involved in our casework, events and publications right up to his death, contributing to our most recent books (both 100 Buildings and 100 Houses), where his pithy judgements combined the forthright opinions and deep knowledge of his best journalism.

At Gavin’s request, there will be no memorial service, so his funeral on Thursday 25th January will be the opportunity for those who would like to mark his death and remember his life. Please contact the office if you would like further details.

Many members will remember the inspirational tours of C20 architecture abroad which he led for us, to destinations including Budapest, New York and Ljubljana, at a blistering pace and with an energy and critical eye that always ensured fresh insights.   The notes of his five C20 Society tours of war cemeteries across France, Belgium and Italy have never been published, but can be downloaded from the War Memorials section of our website.  We have also posted a complete list of all the tours Gavin led on our blog, as a tribute to the breadth of his interests, and his generosity in sharing his passions.

Although some of our more recent casework (such as the listing of Richard Rogers Lloyd’s building, and Stirling’s No 1 Poultry) called for the protection of buildings which themselves replaced ones he had previously championed, he was always willing to assess the architectural qualities of a building without prejudice. We will miss him very much.

An obituary by Alan Powers will appear in the next issue of C20 Magazine, and full obituaries have appeared in the Telegraph, Times and Guardian, as well as the architectural press.