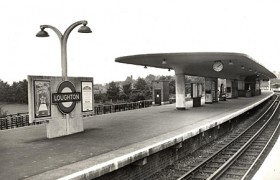 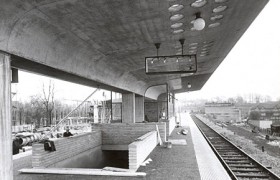 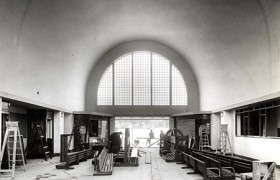 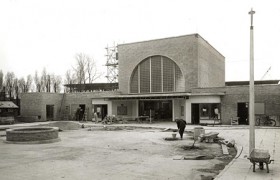 The first station in Loughton was on the Eastern Counties Railway (later part of the Great Eastern Railway or GER). Opened in August 1856, it served as the terminus until the branch was extended to Ongar in Essex in April 1865. The second station of 1865 was brick-built in the standard GER style, with two platforms covered by traditional awnings.

As part of the New Works Programme of 1935-1939 the Epping/Ongar branch of the London & North Eastern Railway (L&NER) was destined to be electrified and to become part of the extension of the Central line. Originally it was planned to alter and enlarge the existing station to facilitate the proposed electric services but this proved impossible due to site problems. A new station was therefore built by the London & North Eastern Railway (L&NER) on the western side of the embankment, the reconstruction allowing for a turn-back facility to reverse trains.

The present station is thus the third to bear the name Loughton, each has been situated on a different site.

The work was commissioned by the L&NER on behalf of London Transport (LT) and the architect chosen was John Murray Easton of Stanley Hall, Easton and Robertson. He was instructed by the L&NER to give the new station an individual character, although, at the same time, it was agreed by the mainline company and LT that it should embody the general LT style. The architect complied with this instruction when he used the barrel vault as the main theme for the new station rather than the ‘drum’ associated with the contemporary Holden stations built for LT. It has been said that the vault echoes the design of the L&NER’s Kings Cross terminal station.

The new buildings were first used by the L&NER on 28 April 1940. The outbreak of war meant that certain original design features, such as special soundproofing tiles in the ceiling of the booking hall, were never, in fact, installed.

The station is approached down a driveway, which serves as a bus station. It is flanked by a single storey wing to the south, that originally housed bus station offices and a bus staff mess room. Entrance to the station is by way of a single open arch, which is projected forward through the booking hall into a subway and four staircases leading to two island platforms.

The single-storey building is steel-framed, and clad externally with buff (gault) bricks with wide raked joints, giving a strip effect. The single Diocletian-type arched window is made up of wired glass divided by horizontal and vertical timber frames (originally glazed bricks divided vertically into five sections by timber framing), and, inside the building, its contours are continued in the barrel-vaulted ceiling. There is a similar arched window on the opposite side to the entrance elevation. The external ceiling lights in the entrance canopy are original.

The ticket office concourse is an imposing double-height area with ceramic floor tiles and rendered walls. Three glass globe lights hang from the ceiling and some original wall-mounted bronze toned light fittings survive. Modern halogen up-lighters, out of keeping with the 1940 design, now illuminate the vaulted space. The roof lights that illuminate the entrance to the subway are circular sets of bottle-lights, possibly railway signal lenses, set in concrete. There is a mixture of new and old standard signage. The booking office, ticket machines, and the kiosk to the right of the entrance were refurbished in 1985. The kiosk has been reglazed with five straight panes, instead of the original curved panes.

The stairs leading up to the platforms have, over time, been refurbished, although the bronze handrails, direction signs with double-flighted arrows and the platform numbers are original.

The platforms feature kidney-shaped canopies, which lend the station much of its dramatically modern appeal. The platforms were completely renovated in 1984 -1985. Sadly this saw new concrete lighting posts, with sodium lighting, and new name boards replacing the original units. They are poor replacements for the originals. The canopies were repaired and waterproofed, using a glass-fibre casing, and equipped with new fluorescent lighting. Regrettably this masked the original lines of ‘port hole’ roof lights that ran along the outer edges of the canopies.

Features surviving from 1940 include the timber platform benches with roundel backs and bronze arm rests, the roundels incorporated into the bronze handrails around the stairwells, the standard clock with roman numerals, and the timber and bronze poster boards. Under each concrete cantilevered platform canopy, there is a centrally located waiting room. The positions of the original vending machines, including the weighing machines, are still discernible.

Subsidiary buildings, including the sub-station to the north, and signal cabin to the south, form an integral part of the station’s design. The signal cabin is now in the care of the LT Museum.

London Underground’s publication Heritage Stations for Conservation, 1989, calls it a “unique station to be treasured as a fine architectural solution to station design”. The Victorian and Thirties Society gave three stars to this station: “… a period piece in good condition without necessity to modernise…Concrete bifurcated lamp standards on roundel bases with advertisement boards – very rare…” (The End of the Line, 1987).