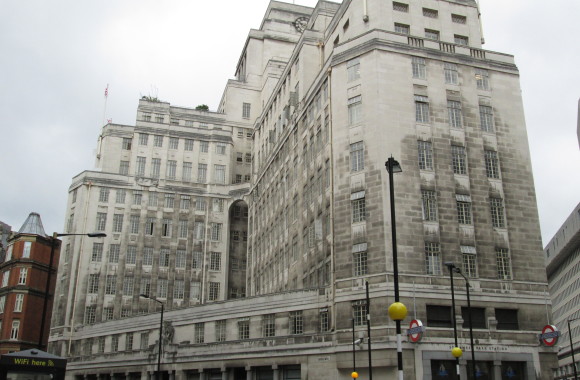 This was the title given by an impressed Observer to Charles Holden’s new headquarters building, 55 Broadway (1925-29) for Underground Electric Railways of London Ltd. It was the tallest office building in London when it opened, and for nearly 90 years its distinctive silhouette has dominated the view down Tothill Street. It was upgraded to Grade I-listed status in 2011: a rare honour for a commercial office of this era. London Underground in its various guises – it is now part of Transport for London (TfL) – has continually occupied the building throughout its history, a link which adds to its historic significance. It has been a good custodian, and has maintained the building for the most part unaltered.

Indeed, the amount of surviving original fabric in both the 55 Broadway office building and the attached St James’s Park Underground Station is exceptional. The seventh floor executive offices and board rooms were designed with the highest quality fittings such as teak flooring, walnut doors and panelling, all of which survive. The offices on the lower floors have been altered, but were designed as utilitarian spaces with flexibility in mind – an innovative concept at the time. The main staircase retains its beautifully detailed bronze balusters and travertine marble wall cladding. This cladding also survives on the landings on each floor, in the ground floor lobby and in the shopping arcade. Each lobby contains prominently located lifts with the original bronze-framed glazed doors. The tenth floor opens out onto roof terraces facing in four directions, created by the building stepping back at this level, and designed to be garden and social spaces: yet another innovation
for London.

For the Society it is therefore a building of great importance, and we were deeply concerned to learn that TfL were planning to vacate the building, leaving it vulnerable to alteration and change of use. We were reassured by TfL that they intend to retain the building even though they will no longer occupy it, but we are opposed to their proposed change of use to residential, which we believe would incur too many unsympathetic alterations. Any alterations would need to be considered carefully, taking into account the exceptional heritage value of the building, both inside and outside.

The proposals to re-configure the shops and entrance are of lesser concern, as they have already been subject to alteration and re-planning in a 1989 scheme by Manser Associates. The major issue for the Society is undoubtedly the proposal to add pavilion extensions to the tenth floor of the building, destroying the familiar silhouette to add just a small amount of floor space. Holden famously likened the appearance of the building to ‘a man astride a horse’, and the extra pavilions would spoil this impression by obscuring the clean protrusion of the services tower. The outcome would be more of a ziggurat than a distinct tower.

TfL submitted an extensive planning application to Westminster City Council following pre-application consultations with the Society. Although care had been taken to respect the original fabric of the building, our fundamental objections to the scheme’s intention remained. As a result, we objected to the planning application, in particular to the proposed change of use and the extensive and unsympathetic rooftop extensions which alter the sculptural qualities and profile of this landmark building.

The Council’s planning committee considered the application by TfL at the end of April, and we were very pleased that it decided to defer a decision on the proposals, echoing our objections to the scheme by advising that office use should be retained and the intrusive pavilions proposed for the tenth floor abandoned. As we await further developments, we will continue to champion the careful conservation and appropriate use of this important building.