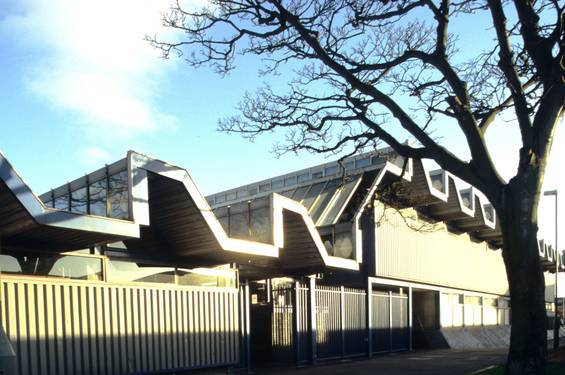 The C20 Society request to list ABK’s Redcar library, threatened with demolition by the Council, is supported by Paul Finch, writing in the AJ.

Writing in the Architects Journal, Paul Finch supported our case for listing Redcar library, built in the 1970s by Ahrends Burton & Koralek, one of the UK’s most interesting post-war practices, whose much-admired buildings include libraries for Trinity College, Dublin and Maidenhead.

The C20 request for listing request was due to plans by Redcar Council to demolish the library, which Finch described as ‘a hymn to steel architecture reflecting Redcar’s steel-making history’. This is particularly surprising as the Council fought a battle with Whitehall to be able to build a library of its choosing, and commissioned ABK to design this fine building, which includes features such as a cafe, which was innovative at the time. Moreover, the Council propose to replace it with a rather grandiose council-led, multi-use complex which seems to belong to an earlier era – before the recession and environmental awareness made us think more carefully about demolishing and replacing buildings for the sake of it.

It has been argued that the library has to be demolished because it doesn’t meet today’s energy standards, but since virtually no building they own or run will do so, this hardly makes a sound case for destroying a fine-building which is still serving its community. Surely it would be better to take up ABK’s offer to design a low-cost refurbishment which would improve its environmental performance? ABK have a good track-record in this area, and it would preserve the embodied energy in the building. Redcar, like most councils, is not over-supplied with good contemporary buildings: all the more reason to cherish this one, which forms part of the history of the town and its people.

Let us hope that Redcar Council will think again.