Holborn Library is a milestone in the history of the modern public library, both as the first large, multi-functional, post-war library in London and for its pioneering architecture, with an elegant façade, striking entrance canopy and influential internal planning. Built by the Holborn Borough Council Architects’ Department under Sydney Cook, the design is attributed to his deputy Ernest Ives and assistants I D Aylott and E L Ansell, in close collaboration with Borough Librarian J Swift; the plans were published in the AJ in August 1956. 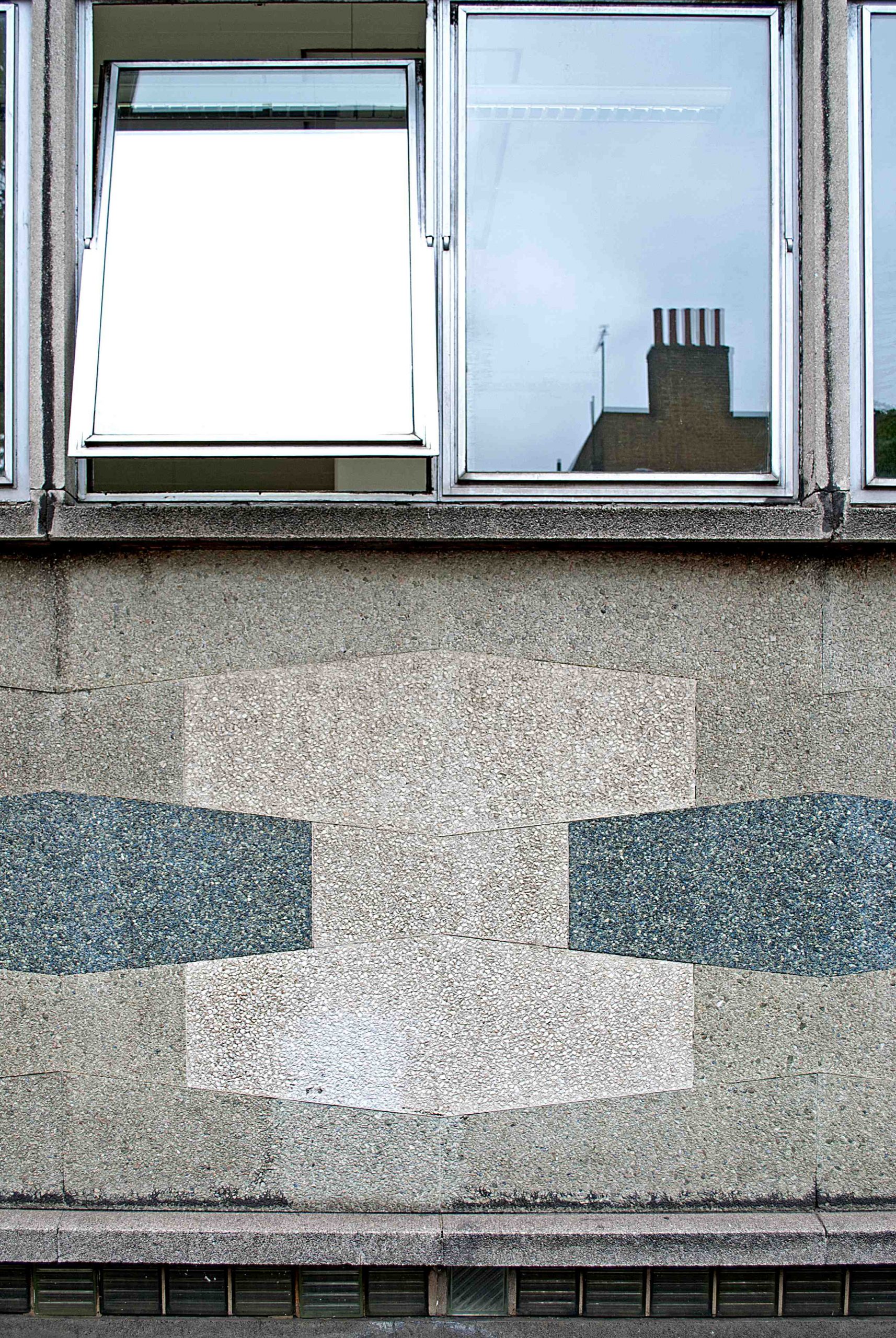 The four-storey building has a reinforced concrete-frame and a non-load-bearing façade on Theobalds Road in narrow russet brick with a generous expanse of metal-framed glazing, which looks particularly striking when lit up at night. In their listing report of 2010 (to which I am much indebted) English Heritage note that ‘Holborn was the first library to exploit the potential of a large area of glazing to create a modern image for the public library, something which became standard in library design afterwards’. Above the glazing are a row of square windows, a set back, steel-framed upper storey and a flat roof. Below it are attractive stone and mosaic panels in a hexagonal pattern picked by the blue floor tiles in the entrance, and the mosaic in the stairwell wall.

The entrance is marked by a swooping canopy and slim piloti clad in blue tesserae, leading to a hall divided from the library by glass and metal screens. This hall originally also served as a passageway to a Council assembly hall in the street behind, and you can still see the metal grille that was brought down to separate it off when the library was closed. Above the glazed hall doors are the royal coat of arms and an inscription commemorating its opening by the Queen.

The large ground-floor reading room, with its Swedish-inspired cantilevered mezzanine balcony, is flooded with light from the glazed façade. The concrete frame is supported by slender square columns with canted capitals, which are slightly inset in the shallow arched ceiling. Originally the columns were clad with grey-blue mosaic, and there was a teak block floor, but both have now been covered. The balcony, reached by an open-tread staircase with its striking mosaic, has a zigzag metal and glass balustrade and timber rail, all adding to the light ‘Festival’ feel of the architecture.

The architects designed many of the fixtures and fittings including wood and metal adjustable shelving with built-in fluorescent lighting, lending desks and ingenious book trolleys with detachable trays that could be kept at the lending desk until full and then attached to the trolleys for shelving. While many of the fittings have been lost, some original bookshelves survive, as well as a display case on the first floor (shown above).

The mezzanine, now home to much of the non-fiction lending collection, originally held academic titles, while the reference collection was on the first floor, in a room now divided to form the local studies library and a book stack. Adjacent to this were a commercial library and carousel reading room, on split levels divided by short flights of stairs. The children’s library was in the basement and had a small fan-shaped theatre, raised dais for storytelling and an aquarium. The music library, offices, book-bindery, staff room and reference library stack were on the second floor, while on the third floor there was a 250-seat lecture theatre and associated facilities, now used as offices.

Holborn library was built to serve an unusually broad user-base, with local academic, publishing and commercial communities and a daytime audience that swelled to 225,000. When it opened on 15 August 1960, it was hailed by the Times Educational Supplement as ‘a bold and imaginative response to the problems of planning a modern central library’, and was compared favourably with the more traditional Kensington Public Library by both Design magazine and the Library Association Record, among much other positive coverage.

As English Heritage pointed out in their listing report, Holborn Library is ‘celebrated as an exemplar by architects and librarians alike’. The C20 Society first proposed it for spot listing in 2000 when Camden mooted relocating the library, and the Society supported English Heritage in their strong recommendation for listing in 2010. Despite this, the recommendation was turned down by ministers. I feel lucky to have such an important, admired and successful building as my local library and am mystified that it has twice been denied designation. Third time lucky?

Susannah Charlton has an MSc in Architectural History from the Bartlett. She is an online and publishing consultant and manages the C20 Society’s website.
Laurence Mackman is a keen architectural photographer and C20 volunteer, who moderates the C20 Flickr group, among other things.